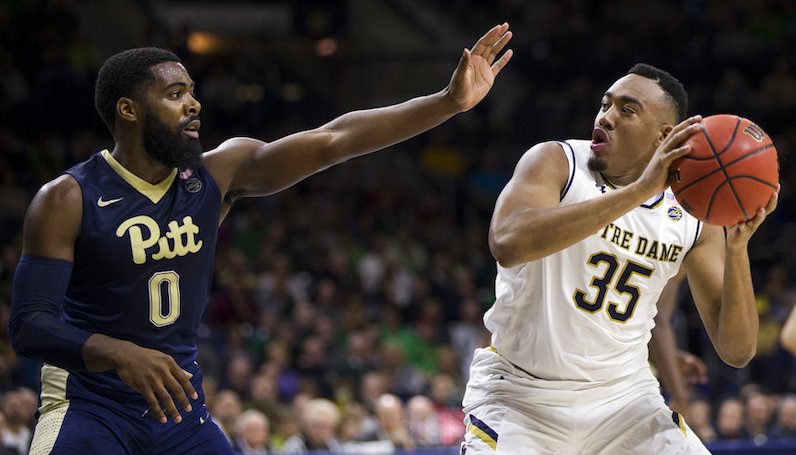 It has been a bit of a sad year over at the ACC Analytics page as our patron saint — one Bonzie Alexander Colson II — missed the vast majority of conference play.

Bonzie Colson played in Notre Dame’s first ACC game, which took place back on Dec. 30 — scoring 22 points and grabbing 17 rebounds in a win over Georgia Tech. In a practice before the NC State game, though, Colson was injured, and would miss the next eight weeks.

Notre Dame fought like hell, Mike Brey wouldn’t have it any other way, but the Irish struggled without Colson, especially on offense.

Not too shabby of a return

In Wednesday’s win over Pittsburgh, Bonzie Colson returned after missing 15 games. Colson, in a senior night performance, did anything but disappoint.

Colson scored 12 points (on 6-of-10 FGA), grabbed nine rebounds and used his 7-foot wingspan to block three shots. According to KenPom, Colson posted an offensive rating of 124 points per 100 possession — the most of anyone that played at least 20 minutes in the game.

As usual, Colson got the job done in a variety of ways on offense. According to Synergy Sports, Colson went 1-of-2 on post-up attempts, 4-of-4 on field goal attempts after a cut and 1-of-2 on put-back attempts after an offensive rebound.

For the season, Colson is now scoring 1.22 points per possession on post-ups (66.7 FG%). That ranks third in Division I (minimum of 50 possessions).

Brooklyn: Right Around the Corner

According to BracketMatrix, Notre Dame is currently on the outside looking in terms the NCAA Tournament field. However, with Colson back — along with Matt Farrell and Rex Pflueger — could Notre Dame be poised for a run in Brooklyn?

The Irish clearly need to do some work at the Barclays Center; however, I’m not in the business of counting Brey, Colson and Farrell out of anything. Those three leaders, playing and coaching with nothing to loss, should be a scary thought for any ACC team. Let’s not forget: Notre Dame already won a tournament this season. It seems like a million years ago, but back in November, the Irish claimed the Maui Invitational title after a thrilling win over Wichita State, now the No. 17 team in KenPom’s efficiency rankings.

If the tournament started today, Notre Dame would be the No. 9 seed, and have a Wednesday afternoon date with Louisville, the current No. 8 seed.

Bonzie Colson is back, thankfully, and that could been some March magic for Notre Dame basketball. This could be quite the show to watch the next few weeks.

Inside The Playbook: How can Duke basketball utilize Trevon Duval in the half-court?