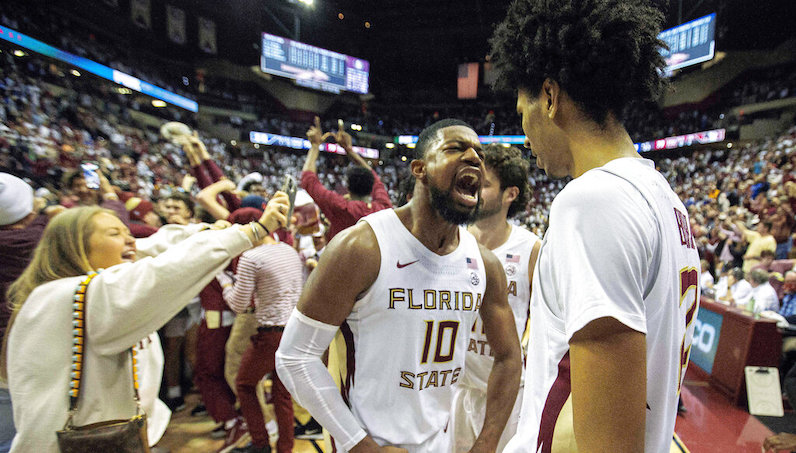 During his time with Florida State basketball, veteran forward Malik Osborne emerged as one of the top role players in the ACC. Unfortunately, the 2021-22 season is over for Osborne, due to an ankle injury suffered earlier this month vs. NC State.

Osborne played in 17 game this season for FSU. The fifth-year senior forward averaged 10.0 points and 6.9 rebounds per game. Osborne is an excellent shooter, too. For the season, Osborne was 20-of-56 (35.7 3P%) from beyond the arc. He was also shooting 83.1 percent from the line.

Earlier this week, Osborne played in the loss at Georgia Tech. His first game out came on Saturday — Florida State losing at home to Virginia Tech, 85-72.

Osborne missed two games earlier this month, following the injury: at Syracuse, then home to North Florida. However, even when Osborne on the floor, it was obvious he wasn’t playing at 100 percent.

After transferring to Florida State from Rice, Osborne took a redshirt for the 2018-19 season. When Osborne joined the active lineup for the 2019-20 season, he instantly fit into FSU’s system. Osborne is a strong rebounder, who can also defend a variety of position types. He was perfect for Florida State’s 1-5 switch scheme on defense.

At 6-foot-9 and 225 pounds, Osborne had the size to play center; however, he could easily work as a 4 in Florida State’s system, too.

Osborne made enough 3-pointers and did enough damage on the offensive glass to keep the offense afloat and create second-chance opportunities. During the 2019-20 season, Osborne posted an 11.7 percent offensive rebound rate.

Simply put: Osborne doesn’t need to have the ball to have a positive impact.

Over the last three seasons, Osborne shot 36.1 percent from downtown and guarded every position (1-5). If that weren’t enough, Osborne is also a low-mistake player and one of the top veteran leaders in the ACC.

Even though he's not playing today or the rest of the season, Malik Osborne was in the middle of that team huddle breaking it down just before tip.

Speaks to how much he means to this team and these players.

Since Osborne joined the rotation, Florida State has a record of 57-18. In 1,553 minutes with Osborne on the floor, FSU outscored opponents by a combined 180 points, according to Pivot Analysis.

How do you replace Malik Osborne?

Leonard Hamilton still has plenty of size that he can lean on: 7-foot-4 Naheem McLeod has started to play better and can have a real impact around the basket. McLeod is shooting 72.5 percent at the rim and has 18 dunks on the season — in 17 games.

Tanor Ngom, a 7-foot-2 center, has missed time this season, but he’s long, moves pretty well for a player his size and has ACC experience.

In General, FSU will likely have to play more with a true, traditional center on the floor: McLeod, Ngom or the 7-foot Quincy Ballard.

Freshman forward John Butler — 7-foot-1, 190 pounds — is already an important part of Florida State’s frontcourt rotation; however, the talented rookie may be asked to do even more. Butler can handle the ball, like surprisingly well. More importantly, though, Butler can shoot: 21-of-47 on 3-point attempts (44.7 3P%).

Butler’s defensive flashes have been awesome this season, too. He can get in a stance and slide laterally vs. twitchy guards, while also offering up some real back-line rim protection (6.1 percent block rate). Given Florida State’s desire to switch 1-5 defensively, it’s a little easier to plug the hole, on paper at least: everyone guards every position.

Of course, Butler doesn’t have the strength or experience of Osborne, who has played a lot of college basketball.

Hamilton could also dial up the usage for two of his most experienced players: 6-foot-8 stretch forward Wyatt Wilkes (career 34.3 3%) and 6-foot-8 forward Harrison Prieto.

Wilkes has been through plenty of battles with this program. Prieto, a sixth-year senior and a future meteorologist, was help vs. Syracuse’s zone when FSU took down the Orange — sans Osborne — back on Jan. 15.

ACC Rookies: Cleveland, Butler near top of the list