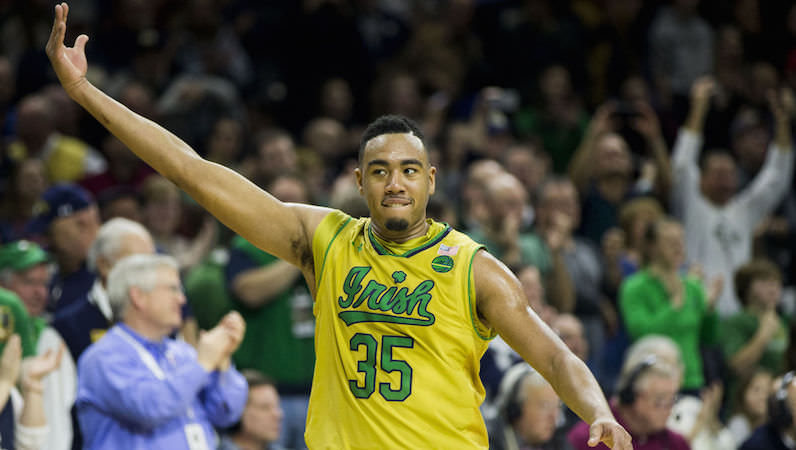 Bonzie Colson does a little bit of everything for Notre Dame. (AP Photo)

Now, today, we will go a few steps further: seedings and predictions.

This wasn’t an easy process. Despite losing a record 10 players to the first round of the NBA Draft, the ACC is still ridiculously loaded.

It’s important to remember, too, that this isn’t an evaluation of a team’s overall roster. I’ve just handpicked four players from each program to build these hypothetical rosters. There are a lot of great ACC teams that have more than four good players — no duh, Brian.

As I stressed in the original post, these rosters were constructed with an emphasis on perimeter shooting. In 3-on-3 basketball, field goal attempts that come from beyond the arc are worth two points; shots made from within the arc are worth only one point. The expected gain of a two over a one is so significant; teams should prioritize range shooting over some other skills.

I tried to make things simple for seeding the teams, and I chose to use a catch-all metric. To do so, I added together the win shares for each team. Each team is ranked numerically; the more win shares, the higher the see.

Here’s how things shook out:

A little bit of housekeeping

It was simple to get win share totals for each returning player, thanks to Sports Reference. However, it was a challenge to settle on the totals for incoming freshman, redshirt freshman and a JUCO transfer. Those numbers simply don’t exist; there’s nothing to draw from.

Here’s how I went about the math of sorting that out, though. Wendell Carter and Trevon Duval at Duke are both top 10 recruits. Last season’s group of top 10 prospects averaged 4.56 win shares in 2016-17.

I assigned each of those guys with 4.5 win shares. Miami’s Lonnie Walker — the No. 15 rated prospect — got 3.5 win shares. Chaundee Brown and M.J. Walker — both rated inside the top 35 prospects — received 3 win shares.

Virginia’s redshirt freshman DeAndre Hunter, a former top 100 prospect, received 2.5 win shares. So, too, did Pitt’s Jared Wilson-Frame — one of the top JUCO players in the nation this season.

Admittedly, the math is a little rough here, and that’s putting it mildly, but I wanted something to work from.

It would be neat for an event like this to have some form of pool play, like the Olympics in basketball. But for the sake of simplicity, the bracket has been organized single-elimination style — just like the ACC Basketball Tournament.

Five additional teams — seeds 5-9 — get a single bye; they’ll start play in the second round.

The six-team opening round is composed of seeds 10-15 in the conference: Florida State, Clemson, NC State, Boston College, Syracuse and Pitt.

In the second round, Miami (8) will take on Virginia Tech (9), which has the makings of a really fun matchup. The winner of that game will advance to the quarterfinals (the third round) to take on Duke (1).

Before we jump into the predictions, remember that this is simply my own speculation. Applying any sort of advanced math or strategy to this would be a bit silly. These are done on mostly feel; so we may differ in opinion. However, feel free to conduct your own experiment, too.

Regardless, here’s how things will flow:

It’s been all chalk so far, but now things start to get a lot more interesting; there isn’t a weak team in the bunch. The fact that Miami and Louisville are seeded No. 8 and No. 7, respectively, seems disrespectful. What idiot came up with these rankings, again?