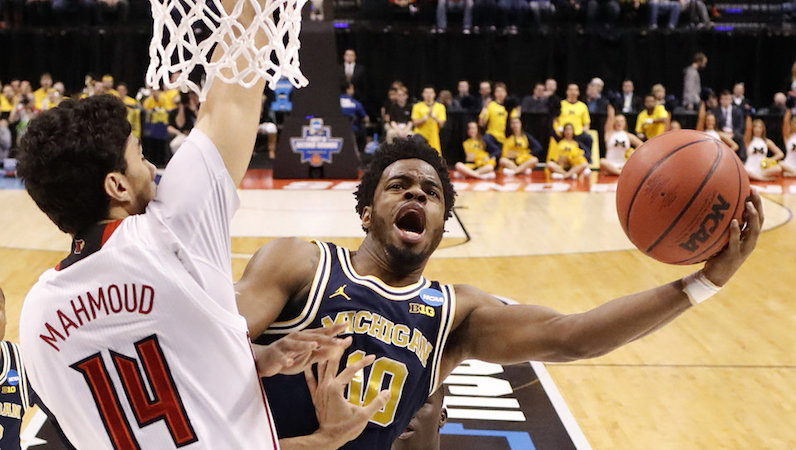 One of the most improved players in the ACC last season was Louisville’s Anas Mahmoud. After playing just 228 minutes and scoring 71 points in the 2015-16 season, the 7-foot Mahmoud became a major cog in Louisville’s system in 2016-17.

Now, as a senior, with a less congested frontcourt rotation, Mahmoud has the platform to emerge as one of the conference’s top centers and an All-Defensive team selection.

There were 11 players in the ACC last season who averaged at least 1.2 blocks per game; Georgia Tech’s Ben Lammer’s led the conference with 3.4 rejections. Lammers also played 1,309 minutes. Inside this group of 11 players, only three played fewer than 600 minutes: Mahmoud, BeeJay Anya and Mamadi Diakite.

Block rate is a statistic that measures what percentage of two-point field-goal attempts a player blocks while on the floor. Mahmoud posted a block rate of 12.6 percent, which ranked No. 4 in the nation, according to KenPom.com. Lammers was a prolific shot-block artist this season — one of the best in the country; however, by this measure, Mahmoud was even better.

Mahmoud can play above the rim on both ends of the floor. According to Synergy Sports, he shot 47.2 percent on post-ups. More importantly, though, Louisville will use Mahmoud as a powerful rim-running big man. As a junior, he shot 70.6 percent as a roller in pick-and-rolls in a somewhat limited sample (12-of-17). He will get more opportunities around the rim in 2017-18, and that’s a good thing.

This season, Louisville featured a potent quartet in its frontcourt: Mangok Mathiang, Ray Spalding, Jaylen Johnson and Mahmoud. Rick Pitino’s power forward-center platoon worked with great success — opponents were never able to escape Louisville’s army of long limbs. Mahmoud, however, was the most efficient player around the basket.

On non-post-ups at the hoop, Mahmoud shot 79.7 percent and scored nearly 1.6 points per possession, per Synergy. Spalding (64.4 percent), Johnson (63.6 percent) and Mathiang (55.7 percent) all trailed Mahmoud in this category.

Johnson decided to keep his name in the NBA Draft; he will not be back at Louisville next season. The cupboard is far from dry, though. Led by Mahmoud and Spalding, the Cardinals will feature a veteran frontcourt that will be one of the ACC’s best.

Louisville has finished in the top 10 in terms of adjusted defensive efficiency in each of the last seven seasons. Even without Donovan Mitchell next winter, don’t bet on that changing.

Carlik Jones headed to professional ranks, will sign with agent