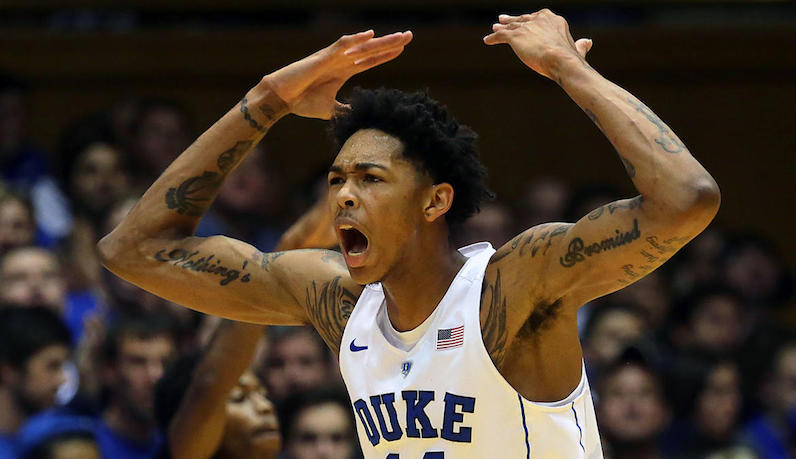 Duke freshman Brandon Ingram, who had a game-high 23 points, celebrates hitting a 3-pointer during the second half of Duke's 82-59 win over Buffalo during an NCAA college basketball game in Durham, N.C., Saturday, Dec. 5, 2015. (AP Photo/Ted Richardson)

Step back into the ACC Basketball Time Machine with me. There are chips and sodas in the back; make yourself comfortable. And please, make sure to take your shoes off before walking across the floor. Thank you.

OK, now that we’re all settled in, let’s go back through Brandon Ingram’s commitment to Duke — why he went away from North Carolina, and how things ended up working out for both sides, thanks in part to the play of now seniors Luke Maye and Kenny Williams.

In the first week of April 2015, Shaka Smart — for years one of the hottest names on the coaching circuit — accepted the head coaching job at Texas — about two weeks after his final VCU squad was knocked out of the NCAA Tournament.

A week later (April 9), North Carolina’s junior swingman JP Tokoto declared for the 2015 NBA Draft. Even with Justin Jackson and Theo Pinson coming off their freshmen seasons, UNC is still in the market for a wing; scholarships are available, too.

(The Philadelphia 76ers drafted Tokoto 58th overall; the two sides agreed to a non-guaranteed deal — a favorite move of the franchise at the time. He was waived that October.)

The day after Tokoto’s decision (April 10), Kenny Williams, who committed to VCU in 2014, decommits from the Rams — a week after Smart heads to Austin.

In the final week of April, 5-star wunderkind recruit Brandon Ingram committed to Duke — about three weeks after the Blue Devils claimed the 2015 national championship. Ingram, who hails from in-state Kinston, was believed by many to be Chapel Hill-bound. The lanky 6-foot-10 forward is the final piece in Duke’s 2015 class, which finishes No. 2 nationally, according to 247 Sports.

Not too long after that — May 2 — Kenny Williams commits to UNC over Texas, Michigan, Virginia and Florida (Billy Donovan had just left to coach the OKC Thunder). Williams joins Luke Maye as the other half of North Carolina’s 2015 class, which ranks No. 70.

At the time, Duke basketball had a lot to offer Brandon Ingram, too. The school had recently won yet another title — its second in five years — and its one-and-done ascension was starting to really takeoff. With the departures of Jahlil Okafor, Justise Winslow and Tyus Jones to the pros, Duke could sell Ingram on one-and-done success, and plenty of possessions.

Of course, this is the spring of 2015 — deep in the heart of the NCAA’s near-decade long investigation into North Carolina athletics. This is revisionist history, so who knows what would’ve happened; it’s impossible to say. However, if not for the investigation, there’s certainly a good chance Ingram lands at UNC.

Brandon Ingram said that were it not for NCAA questions at UNC he likely would have committed there in the Fall. More later today #mcdaag

(That April, Ingram made a comment to ESPNU about UNC receiving its notice of allegations, after his commitment to Duke. It was a bit odd, too: the school didn’t receive the NOA until May.)

Regardless, it seems clear from the outside: Brandon Ingram has no cognitive dissonance with his decision to attend Duke. He’s spoken publicly and proudly about #TheBrotherhood, and just last month, he was working out in Durham at Duke. Plus, after nine months, he became the No. 2 pick in the 2016 NBA Draft. Not too shabby.

However, it’s still fun to wonder: what could’ve been, if Ingram went to the lighter-blue side of the 15-501 rivalry.

(Quick tip of the hat to Mark Carroll — my colleague and former editor — for the help on the scholarship calculus here.)

The best of the bunch — easily

In any sort of transaction — including silly revisionist hypotheticals like this one — it’s important to note: which side got the best piece. The totality of Maye and Williams is rather impressive (more on this in a moment), especially since Maye has become such a productive player. Ingram, without question, though, is the best player.

Ingram has the makings of a future star in the NBA — a multi-positional string bean that can create matchup problems. His shot is a bit of a mystery at the moment, but when he solidifies that, look out. In his second NBA season (he’s still just 20), Ingram averaged 16 points and posted a usage rate north of 22 percent. (Not too many other players have hit those benchmarks at his age.) He may even end up being a swing piece in a trade for Kawhi Leonard, as LeBron James looks to consolidate power in the NBA.

Before that, though, Ingram was a monster in his one season at Duke: 17.3 points, 80 three-pointers (41 3P%), 22.5 PER, 4.9 win shares. With the offensive controls toggling back and forth between Ingram and Grayson Allen — both players finished with usage rates above 25 percent — Duke created an offense that finished fourth nationally in adjusted offensive efficiency, per KenPom.

In terms of raw efficiency, Duke ranked sixth nationally, according to Synergy Sports: 1.02 points per possession. Ingram and Allen accounted for 1,359 of Duke’s 2,972 possessions that season — roughly 46 percent.

In what would’ve been Ingram’s freshman season, North Carolina came within one miracle shot, courtesy of Villanova’s Kris Jenkins, from possibly winning a national title. This is about as close as you can come to winning a championship without, ya know, actually winning it.

This was, obviously, a really good UNC team: 33 wins, No. 1 in adjusted offensive efficiency and two future first round picks on the roster — Brice Johnson and Justin Jackson. It wasn’t exactly the prettiest offense, though; North Carolina shot under 33 percent from downtown, and ranked 300th nationally (0.85 points per possession) in spot-up efficiency, per Synergy.

Those Tar Heels got the job done by cleaning the glass — 40.7 offense rebound rate (No. 3 in Division I), and turning it into instant-offense. North Carolina scored 395 points that season on put-back possessions, which was tops in the nation.

Suffice to say, Ingram’s spot-up efficiency would’ve been a serious boon for that team: 1.19 points per possession (60.7 eFG%) — sixth in the ACC, according to Synergy. That year, Ingram scored 257 points on spot-ups; only Grayson Allen, within the ACC, scored more: 259.

UNC certainly didn’t need Ingram to win a national title; who knows what happens in that title game if Jenkins’ shot sails wide. It wasn’t just that game, either; millions variable went into that season. It’s not fair to just copy-and-paste a player into a roster, and know for sure what would’ve happened. (That said, my word, that UNC team would’ve been freaking awesome with Ingram, too.)

What Williams and Maye have become

If the focus is on just the 2015-16 season, this hypothetical is a no-brainer: Ingram was far more impactful. It’s not even close. However, if you examine the following two seasons: do things level out?

As a sophomore, Luke Maye carved out a rotation spot in a crowded frontcourt, and went on to hit one of the biggest shots in program history — en route to UNC winning the 2017 title. In 2017-18, though, Maye exceeded even the most optimistic of expectations — 17 points, 10 rebounds, 23.8 PER — as he emerged as one of the game’s premier inside-out threats. He was named first team All-ACC.

Kenny Williams, on the other hand, has yet to hit star potential, but he’s been a darn good two-way rotation piece for Roy Williams. The younger Williams can hang defensively across a couple of positions (1.9 steals per 100 possessions), and he’s emerged as one of the ACC’s top three-point bombers. According to Synergy, Williams scored 1.22 points per possession (60.5 eFG%) on catch-and-shoots in 2017-18 — No. 5 in the ACC (minimum 100 attempts).

(It also can’t be ignored: if, hypothetically, Ingram went to UNC, balled out for a year and then left, the Tar Heels could/would recruit another star wing to take his place in 2016-17.)

For their careers: Williams and Maye

According to Sports Reference, Maye and Williams have combined for 14.1 win shares during their careers at UNC, too.

That’s an awful lot of production, and they still aren’t done. North Carolina has all of the makings of another Final Four team for 2019 — and Maye and Williams are a big part of that picture.

Both guys also have an excellent shot of joining the 1,000-point club at UNC. Maye (859 career points) will definitely hit that benchmark as a senior; it’s within reach for Williams (607 career points), too, but he will need to do some work.

It all came out in the wash

I believe it’s safe to say that both sides — Duke and North Carolina — can feel pleased with how this broke. Duke landed one of the top players in the 2015 class, who went on to help them win some games, and become a high draft pick.

Meanwhile, North Carolina swung-and-missed on a future lottery pick; however, Roy and the Heels landed two wildly productive four-year rotation players that have started a bunch of games for them. UNC won a national title in 2017, and while the program’s recruiting may have taken a slight dip over that arc, it’s leveled out. A top-15 recruiting class, which includes Nassir Little — a projected 2019 lottery pick, has arrived in Chapel Hill.

Now: as you exit the ACC Time Machine, don’t forget to drop your recyclables in the bin before you head out the door. We’ll see you back here when it’s time to reexamine how Lonnie Walker managed to shot 35 percent on three-pointers with hair this cool.