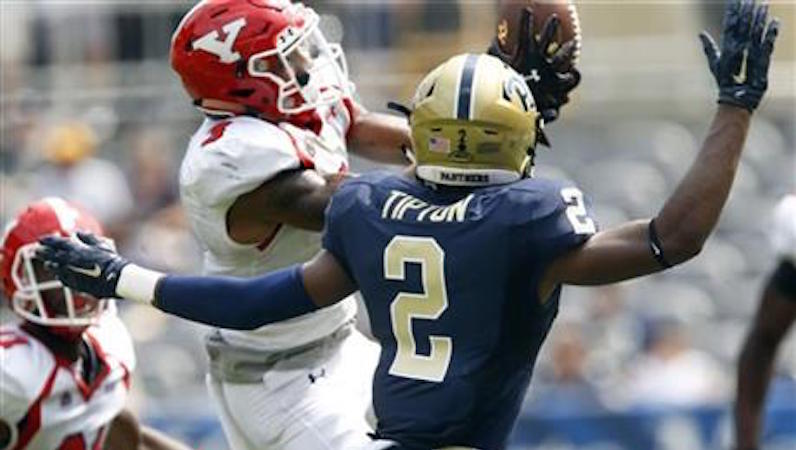 This is a significant blow for the Panthers. Pitt returns several dynamic perimeter playmakers — Jester Weah and Quadree Henderson. But with the departures of tight end Scott Ornoff and receiver Dontez Ford, there was a serious opportunity for Tipton to emerge.

Unfortunately for Tipton, this is the third injury of his career at Pitt. He played in four games as a freshman, before an injury in practice cost him the remainder of the season. In 2016, Tipton appeared in the first nine games, but in the road loss to Miami, he was once again injury. Tipton missed the final four games, including the win at Clemson.

Now, new quarterback Max Browne will have to locate another third target.

Efficiency through the air

Pitt was a power run offense in 2016; that’s what you do when James Conner is on your roster. The Panthers averaged 41.7 run play per game; on the flip side, Pitt attempted 24.9 passes per game.

Despite the lower volume of attempts, quarterback Nathan Peterman — a Tennessee transfer — had a career year, and was one of the most efficient passers in the nation.

Weah and Henderson were the two highlight reel stars; Orndoff was a reliable safety net. In a smaller sample, though, Tre Tipton was rather valuable.

According to Football Study Hall, Tipton caught 12 of the 15 passes thrown in his direction. Excluding the running backs — Tipton’s 80 percent catch rate was the best on Pitt’s roster.

Tipton averaged 12.1 yards per target, too, which was second best on the team — behind on Weah, the ACC’s leader in yards per reception in 2016.

Nine of Tipton’s 12 receptions (75%) went for first downs, per cfbstats.com.

As we’ve discussed in this space before, end-arounds, reverses and jet sweeps are an important function of Pitt’s offense. The Panthers like to hammer you up the middle with power, then crack explosive plays on the perimeter.

Henderson is the prime candidate when it comes to this; the return specialist carried the ball 60 times for 631 yards (10.5 per carry) and five touchdowns last season.

Tipton was involved here, too, though. And he likely would’ve seen more carries this season. In 2016, Tipton ran 11 times (1.22 per game) for 61 yards. He posted a long carry of 21 yards; three of his runs went for first downs, too.

Will Pitt’s success with defensive backfield recruits finally translate to the field?