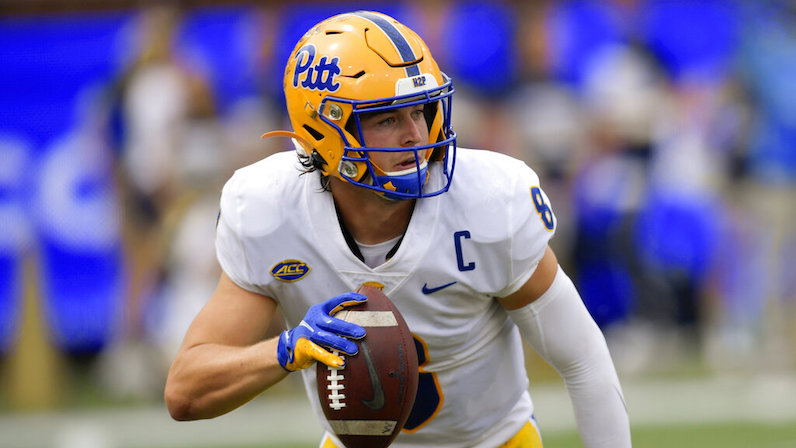 Pittsburgh quarterback Kenny Pickett (8) runs out of the pocket against Georgia Tech during the first half of an NCAA college football game, Saturday, Oct. 2, 2021, in Atlanta. (AP Photo/Mike Stewart)

Let’s get right to it. From outstanding passing performances, to head coaches in trouble: here’s this week’s ACC Football Weekend Recap, which features Kenny Pickett, Devin Leary and Manny Diaz, among others.

This week’s ACC Football Power Rankings are out; make sure to check those out here.

Pickett had arguably his most pedestrian game of the season, so far; however, he was still terrific in the win over Virginia Tech. The veteran quarterback threw for 203 yards, two touchdowns and no interceptions. For the season now, Pickett has completed 69.8 percent of his pass attempts, while averaging 9.4 yards per attempt.

With wideout Jordan Addison as his main target, Pickett has thrown 21 touchdowns and only one interception on the season. Going back to the 2000 season, only three FBS quarterbacks — through the first six games of a season — have thrown for 20+ touchdowns and one or fewer interceptions. Pickett is joined by Alabama’s Tua Tagovailoa (2019) and Geno Smith of West Virginia (2012).

Much like NC State has at times flown under the radar in the Atlantic Division race, Leary doesn’t seem to attract nearly as much attention as some of the league’s other elite passers in Chapel Hill, Pittsburgh and Charlottesville.

Leary was outstanding on the road at Boston College, though. He completed 67 percent of his throws (16-for-24) for 251 yards with three touchdowns to lead the Wolfpack to a 2-0 start in ACC play.

Entering Saturday’s matchup in Charlottesville, ACC opponents averaged 39.3 points per game in four games against the Virginia defense. The Cavaliers responded by shutting out Duke 48-0.

It’s the program’s most-lopsided ACC win since 2007 and its first league shutout since 2008. Virginia will look to extend its current winning streak to four games when it welcomes Georgia Tech to Scott Stadium this weekend.

(Oh, by the way, Brennan Armstrong was pretty dang good, too: 364 yards and two touchdowns through the air vs. Duke.)

Downs snagged a 45-yard touchdown pass from Sam Howell to help open things up vs. Miami. The sophomore wideout now has a touchdown reception in every game this season (8 total); he’s caught a touchdown pass in eight straight games, dating back to last season.

Halfway through a regular season that will determine whether he coaches the #Hokies for a seventh season, Justin Fuente is grasping for answers.https://t.co/s8befm3GXr

That Orange figure in the distance inside Kenan Stadium. That’s Manny Diaz, alone in his thoughts after another devastating night at the office https://t.co/FSCIweaOG4 pic.twitter.com/GyX7lykrsR