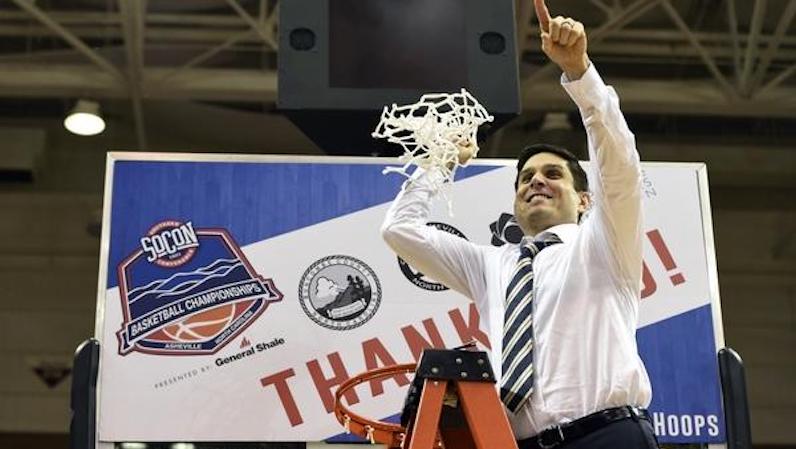 In this March 5, 2018, file photo, UNC-Greensboro head coach Wes Miller holds the basketball net in the air to celebrate his team's 62-47 win over East Tennessee State in the NCAA college basketball championship game for the Southern Conference, in Asheville, N.C. Miller is the youngest head coach in the NCAA Tournament but he still has plenty of experience. The 35-year-old, seventh-year coach is preparing the Spartans for their first tournament berth since 2001 while tuning out the distraction of hearing his name floated for bigger jobs. (AP Photo/Kathy Kmonicek, File)

According to Jeff Goodman of Stadium, Wes Miller of UNC Greensboro and East Tennessee State’s Steve Forbes are the frontrunners.

Still no change for me as far as the Wake Forest situation is concerned. Steve Forbes and Wes Miller remain two leaders in the clubhouse, per source.

As far as the timeline goes, well, things are moving quickly. After weeks of indecision and mixed messages regarding Manning’s status, Wake Forest and athletic director John Currie appear poised to make a pick soon.

Jon Rothstein notes that the process will likely be wrapped up by the end of this week.

Sources: Wake Forest is expected to name a new head coach by the end of the week.

Nothing is likely to be finalized today.

When a hire is made, the new coach must hit the ground running: a roster needs to be assembled. That’s the priority.

Over the last few days, several members of Wake Forest’s 2020 recruiting class asked for releases from their LOI. Talented rising sophomore guard Jahcobi Neath entered the NCAA transfer portal on Tuesday (April 28), too. Neath left the door open for a return, though.

Wake Forest is already dealing with the departure of veteran wing Chaundee Brown to the transfer portal; after four seasons in Winston-Salem, Brandon Childress, an underrated pick-and-roll guard, is gone, too.

At the top of the list will be making sure to retain Olivier Sarr for his senior season. Sarr, an All-ACC center, would be a massive floor-raiser for the 2020-21 roster. During his junior season, the 7-foot Sarr averaged 13.7 points, 9 rebounds and 1.2 blocks per game. An elite defensive rebounder (25.8 percent defensive rebound rate), Sarr also shot 66 percent at the rim this year.

Sarr elected to not enter the 2020 NBA Draft, and that deadline has passed; however, other programs could come calling if Sarr wants to remain stateside next year.

Miller at the top of the list for Manning replacements