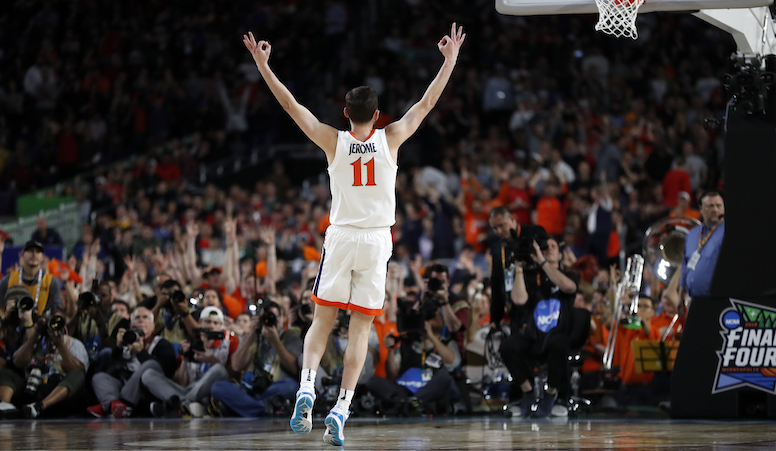 Virginia's Ty Jerome (11) reacts after shooting a 3-point basket during the first half in the championship of the Final Four NCAA college basketball tournament against Texas Tech, Monday, April 8, 2019, in Minneapolis. (AP Photo/Jeff Roberson)

One week after Virginia completed its run to the 2019 national championship, the team’s starting point guard — Ty Jerome — declared for the 2019 NBA Draft. Jerome, who averaged 13.6 points and 5.5 assists, will sign with an agent, too.

Jerome has until May 29 to decide if he wishes to return to school for his final season of eligibility.

Virginia's Ty Jerome will sign with an agent and enter the 2019 NBA Draft, per his Instagram page.

An All-ACC guard, Jerome played in 105 games over the last three seasons in Charlottesville; he started 71 combined games as a sophomore and junior. He scored 16 points and handed out eight assists during Virginia’s title game win over Texas Tech.

While Jerome lacks an explosive first step, he’s still pretty quick and a wonderfully skilled offense player. Jerome is one of the better on-the-move shooters in this class; he knows how to relocate with efficiency and play well off of screens. According to Synergy Sports, he shot 43 percent (54.2 eFG%) coming off screens this season. Jerome is a career 39.2 percent 3-point shooter (424 3PA).

Jerome is also an excellent passer, who emerged this season (10.6 assists per 100 possessions) as a slash-and-dish player in Virginia’s continuity ball screen offense. Virginia scored 1.12 points per possession when Jerome passed out of the pick-and-roll this season. At 6-foot-5, Jerome can use his height to see over the top of defenders, too.

It remains to be seen if Jerome could be a primary ball-handler in the NBA; that will be a major question for him to address as a prospect — along with his ability to shoot over the top of NBA-level closeouts.

However, Jerome has a countermove in his back pocket, too: the floater. If you pay attention to college hoops, you know just how clever Jerome is shooting floaters or runners — using all kinds of angles and the backboard to hunt for points when he can’t get all of the way to the rim.

Jerome shot 39 percent on 2-point attempts away from the rim this season — including 44 percent on runners, per Synergy. Over 90 percent of those makes were unassisted, too.

Jerome isn’t super long, but he looks like a totally adequate defender on the next level. He won’t make mistakes, and like a lot of Virginia players that have turned into NBA role players: Jerome will guard his assignment.