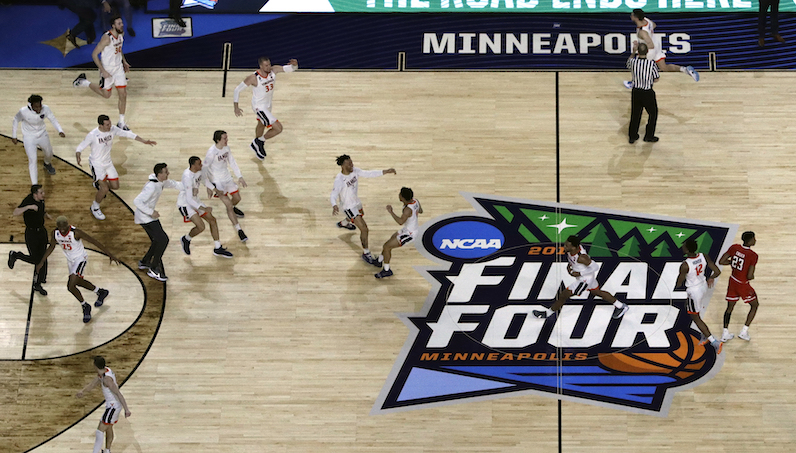 They — whoever they is — call it March Madness for a reason. One year ago, Virginia basketball was licking its wounds after its historic upset loss to UMBC. On Monday night in Minneapolis, though, just before the clock hit midnight on the East Coast, something cosmic happened — as Virginia claimed the 2019 NCAA Men’s Basketball Tournament title with an 85-77 win over Texas Tech.

The win marks the first national title in program history for Virginia, which has dominated the ACC over the last six seasons — twice champions of the ACC and four times the league’s regular season champ. This, however, was the elusive final piece — a trip to the Final Four and perhaps even more nets to cut down after that.

The Big 3, One last time

As usual with UVA, the win was a collective effort; however, Virginia’s stars shined. De’Andre Hunter put together a masterpiece: 27 points (8-of-16 FGA, four 3-pointers) and seven rebounds. On the other end of the floor, the league’s Defensive Player of the Year was monstrous. Mostly matched up with fellow future lottery pick Jarrett Culver, Hunter lived in Culver’s head and invaded his offensive space.

Culver finished with 15 points on 5-of-22 shooting from the floor (0-of-6 3PA). It’s tough to so quickly put into words just how bothersome Hunter was on Culver. For Texas Tech, this was a demoralizing performance.

We've seen it before this season — UVA has used Hunter as a stopper vs. NAW, Coby White, Battle, Edwards. Helluva performance one-on-one against Culver tonight.

Then there was Ty Jerome, who was spectacular, too: 16 points, nine assists and just one turnover. Jerome’s probing of Tech’s defense proved pivotal. He found shooter after shooter against the No. 1 defense in the country.

Kyle Guy was the beneficiary of some of the looks, and he finished with a cool 24 points (4-of-9 3PA). For his efforts on Monday — and in the win over Auburn — Guy was named the Final Four’s Most Outstanding Player.

In general, the Red Raiders did a poor job sticking to Virginia’s arsenal of 3-point shooters. The over-help on defense proved costly.

At multiple times late in this game, it looked as though things would slip away from Virginia. And then Hunter or Jerome would make a huge play. Hunter drilled a 3-pointer to send the game to overtime, and UVA went on an 11-0 run from late in the second half and into overtime. That run essentially sealed things for the Cavaliers.

Coach Bennett put it on the board!! NATIONAL. CHAMPIONS. 🏆
🔶⚔️🔷 #GoHoos #NationalChampionship pic.twitter.com/iBj6kBeIWm