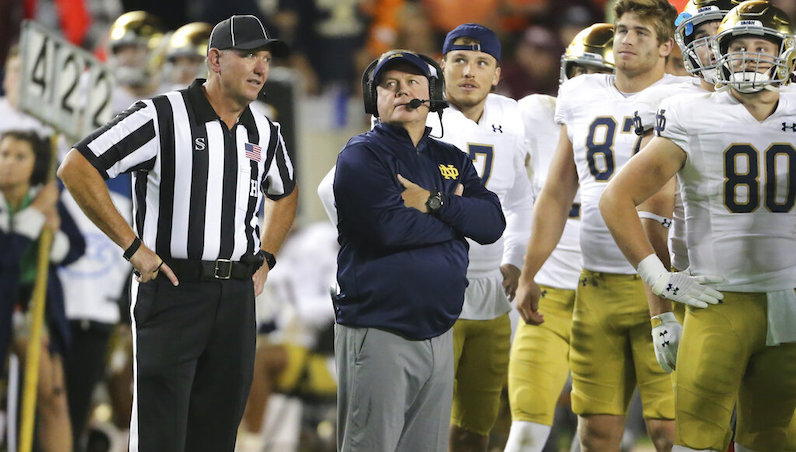 during the first half of an NCAA college football game in Blacksburg, Va., Saturday October 9, 2021. (AP Photo/Matt Gentry)

In what is already proving to be a wild offseason for coaching changes in major college football, one of the more surprising moves came from Brian Kelly.

The way the news broke likely won’t bring too much support from his soon-to-be former roster, too.

Brian Kelly just sent this out to Notre Dame’s roster, per source: pic.twitter.com/7xOae8eE5x

Kelly, who started his tenure at Notre Dame in 2010, will leave South Bend after 12 seasons for LSU. This creates an absolutely hilarious juxtaposition from LSU’s former coach, Ed Orgeron, and Kelly.

During his time with the Irish, Kelly led Notre Dame to the 2013 BCS National Championship game, losing to Alabama. Kelly and Notre Dame also made the College Football Playoff in both 2018 and 2020. He’s the winningest coach in program history.

Kelly was named ACC Coach of the Year in 2020 — with Notre Dame football joining the league for one season amid the COVID-19 pandemic.

David Cutcliffe out at Duke