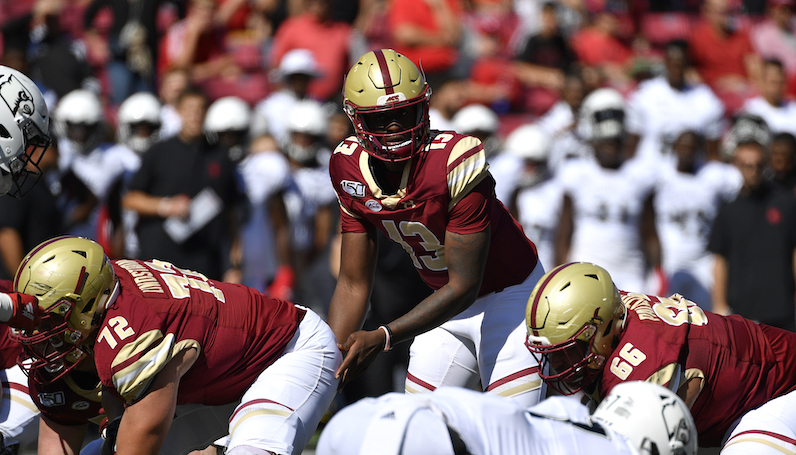 Boston College will be without veteran quarterback Anthony Brown for the remainder of the 2019 season. During the team’s loss at Louisville two weeks ago, Brown suffered a non-contact injury, which are always scary.

Brown was initially rule out for this week’s game against NC State; however, the junior signal-caller will miss the rest of the 2019 campaign, too. A three-year starter, Brown has thrown for 4,738 yards and 40 touchdowns — to 20 interceptions — in his career.

Thinking of our guy @anthonybrown_2 as he is out for the season due to injury.#WeAreBC

Each and every season, though, Brown improved as a player. As his career progressed, Brown became more efficient and explosive. During his rookie season in 2017, Brown completed less than 52 percent of his pass attempts — along with nine interceptions to 11 touchdown tosses. He averaged 5.3 yards per attempt that year, too. His freshman season was also cut short after Brown suffered an injury against NC State.

In 2018, as a sophomore, Brown’s completion rate jumped to 55.4 percent. He also averaged 7.4 yards per pass attempt. Through the first six games of this season, he posted a completion rate of 59.1 percent while averaging 9.1 yards per attempt — No. 1 in the ACC.

So far this season, Brown had seven completions of 40+ yards and five completions of 50+ yards, both of which are currently tied for No. 1 in the conference.

The Eagles must now lean on Dennis Grosel or Matt Valecce. Grosel, in relief of Brown, completed 9-of-24 pass attempts (37.5 percent) against Louisville — for 111 yards and three touchdowns. All of this almost certainly means that BC will pound AJ Dillon — who is averaging 24 carries per game — even more.

More numbers on the high-volume workload for AJ Dillon