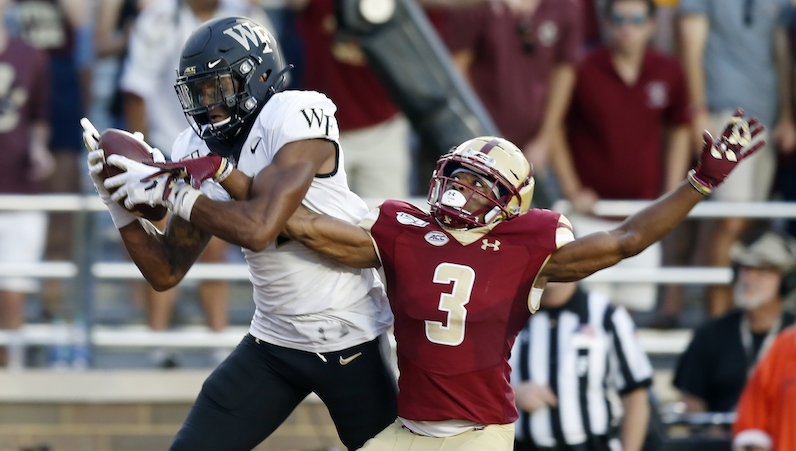 The final weekend of September proved to be a wacky one for the ACC. Clemson nearly took a tumble at UNC, Virginia Tech was crushed in front of a home crowd by Duke and Wake Forest just keeps on winning. As the calendar gets ready to flip to October, let’s check in with this week’s ACC Football Power Rankings

Clemson managed to avoid a potential disaster in Chapel Hill, thanks to a two-point conversation stop. The 21-20 win over UNC won’t inspire a ton of confidence for a much-hyped passing game that’s struggled to find footing in 2019, though.

Clemson's passing game struggles are really interesting. The deep ball is fine, and behind-the-line passes are more successful than '18, but…

Tee Higgins continues to produce, however: six catches, 129 yards and a touchdown grab against North Carolina.

Wake Forest improved to 5-0 with a key road win over A.J. Dillon and Boston College. Once again, wideouts Sage Surratt and Scotty Washington played key roles in the game. It’s the fourth time this season that those two have each caught a touchdown pass in the same game; of course, Surratt has snagged at least one touchdown pass in all five games this season, so far.

Over the last 20 years of Wake Forest football, only four players have recorded 25+ receptions, 450+ receiving yards and 5+ touchdown through the first five games of the season. Here’s a look at that list:

Notre Dame is an excellent defensive team — No. 6 in the FBS in ESPN’s efficiency rating. On Saturday, the Irish turned up the heat on Virginia, forcing five turnovers in a 15-point victory — two interceptions from Bryce Perkins, who coughed up three fumbles, too. Things actually started mostly fine for UVA; the Cavaliers were up three at halftime, and Perkins had some decent passing numbers, too. That didn’t last, though.

Bryce Perkins in the first half at Notre Dame:

The third quarter of this game was all Notre Dame as Virginia lost for just the first time this season. Going back to the 2000 season, ACC teams have turned the ball over five or more times in a single game 87 different times. Those teams posted a combined record of 10-77 in those 87 games.

Duke looked absolutely dominant on the road last Friday against Virginia Tech — crushing the Hokies by 35 points in Lane Stadium. The Blue Devils feasted on turnovers and quarterback Quentin Harris was efficient, once again.

Harris completed 74 percent of his passes and accounted for three touchdowns, including this 42-yard score that capped a 31-0 run from the Blue Devils.

Another game, another one-possession affair; this time, however, North Carolina fell just short against Clemson. So far, all five of North Carolina’s games this season have been decided by six or fewer points. The Tar Heels nearly pulled off an upset over No. 1 Clemson that would’ve double as one of the greatest victories in program history.

#UNC QB Sam Howell: "That's the best team in the country and we just took them down to the wire and we should have won…"

Moral victories may not mean much, but this is a solid UNC team. Sam Howell and Dyami Brown continues to emerge as a one quarterback-wide receiver 1-2 punch.

Up Next: at Georgia Tech

It’s tough to get a good sense of this Miami team at this point in the season; however, we should know more after this weekend’s matchup with Virginia Tech. The Hurricanes have a chance to make a statement and flex some muscles against an ACC opponent. Where’s Virginia Tech at mentally after last Friday?

Up Next: Virginia Tech

With James Blackman injured (MCL), Alex Hornibrook stepped up in a big way against NC State. In his first start since last November, the Wisconsin transfer threw for a career-high 316 yards, three touchdown and zero interceptions.

Florida State got another solid performance from running back Cam Akers — with nearly 94 percent of his rushing yards coming after contact. Akers currently ranks second in the ACC with an average of 138 yards from scrimmage per game.

This was a solid win for FSU, too, which now gets a bye week to prepare for its biggest game of the 2019 season: Clemson.

Pittsburgh is a confusing team. Some weeks, the Panthers are capable of battling toe-to-toe with Penn State and UCF. On the other hand, some weeks, Pitt struggles with teams like Delaware or Ohio. It doesn’t have to be Halloween for tricks or teats in Pittsburgh.

Kenny Pickett (shoulder) sat out, which meant that Nick Patti got the start. Pittsburgh won, 17-14, but it wasn’t pretty, as the score indicates.

I'd make fun of UCF bc Pitt is currently life and death with DELAWARE, but this is MAXIMUM Pitt stuff right here. Narduzzi's entire existence is major upsets surrounded by losses to, like, D3 schools.

Before Pitt’s attention turns to Duke, Pat Narduzzi needs to tighten things up. The Panthers were sloppy in this game: Pitt turned the ball over twice, including an interception from Patti, and committed 13 penalties.

Pitt’s defense did come to play, though.

Here is the ACC Team of the Week on the defensive side!https://t.co/Ti2ZzinlbK pic.twitter.com/FX0d1QPDD1

Up Next: at Duke

In the final tune-up before seven straight conference games, Syracuse flexed its muscles, defeating Holy Cross 41-3. Syracuse has now put together two straight victories for just the first time all season, albeit against Western Michigan and Holy Cross.

Over this short two-game stretch, quarterback Tommy DeVito has completed 70 percent of his passes, while throwing for eight touchdowns — to just one interception. This has been a bumpy season, so far, for DeVito, but he’s now up to 11 touchdown passes.

After trailing 10-0 early, Boston College made things interesting against Wake Forest; however, the Eagles fell just short at home, 27-24. A.J. Dillon was brilliant as usual, though. The junior running back carried 23 times for 159 yards — his third straight game with 150+ rushing yards.

Since the 2017 season, only one FBS player has more total carries than Dillon: Wisconsin’s Jonathan Taylor with 690. Dillon, in three fewer games, has 649.

Up Next: at Louisville

It’s been nearly a month since Louisville played a home game. On Saturday, Louisville will host Boston College. As the Cardinals looks for their first ACC game of the season, they enter the weekend as a slight home-field favorite.

Up Next: Boston College

NC State experienced a great deal of turnover of the offensive side of the ball between 2018 and 2019. With a new set of quarterbacks and coordinators, things have looked iffy at times with the Pack. Matt McKay (6.1 yards per attempt) got the start at FSU, but was pulled from the game. In his place, Bailey Hockman took the majority of Saturday’s snaps. Devin Leary saw time, too, completing four passes for 54 yards.

The Wolfpack have a bye week to get ready for Syracuse; in the meantime, NC State must attempt to find something positive on the offensive side of the ball. After averaging 8.2 yards per pass attempt last season, NC State is down to six yards per attempt in 2019. That ranks 13th in the ACC, ahead of only Georgia Tech.

Once upon a time, Virginia Tech hosting a prime-time game was one of the most electric productions in college football. Those memories seemed rather distant last Friday as Duke pummeled Virginia Tech 45-10.

While rotating quarterbacks, the Hokies turned the ball over two times; Virginia Tech now has a -8 turnover differential on the season, the worst in the ACC.

With a bye week already in the past, things don’t get any easier. Tech must travel to Miami this week, then return home for matchups with Rhode Island and UNC. After that, the Hokies travel to South Bend and return to Blacksburg for a game with Wake Forest.

Things are bad now, but they could get a whole lot worse over the next month. Yikes.

Up Next: at Miami

It can’t feel great to score just two points in a football, especially if it comes in a loss to your former employer. However, that’s exactly what happened to Georgia Tech and Geoff Collins — falling 24-2 against Temple. According to Sports Reference, it’s been a while since an ACC team scored just two points in a game: Duke at Georgia Tech, 2002.

Up Next: North Carolina