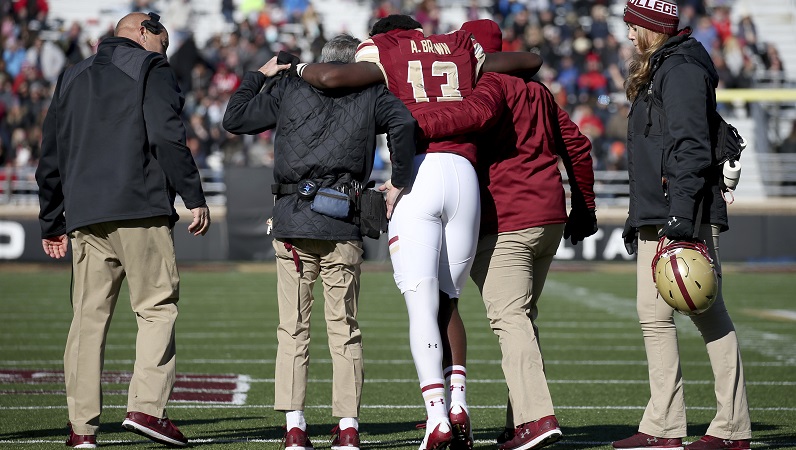 Boston College quarterback Anthony Brown (13) is helped off the field after getting injured during the first half of an NCAA college football game against North Carolina State Saturday, Nov. 11, 2017, in Boston. (AP Photo/Mary Schwalm)

Boston College head coach Steve Addazio announced Monday that redshirt freshman quarterback Anthony Brown will miss the remainder of the season with a right leg injury. Brown was injured in the second quarter in Saturday’s 17-14 setback to No. 23 NC State at Alumni Stadium.

Brown started all 10 games at quarterback for Boston College in 2017 and was one of the top freshmen passers in the country. He is in the top five among rookie signal callers in passing yards (1,367) and passing touchdowns (11).

Brown had his best performance of his young career in the Oct. 21 win at Virginia. The New Jersey native finished 19-of-24 passing for 275 yards and three touchdowns. He was named ACC Rookie of the Week for the first time in his career following the UVA victory and also was one of eight quarterbacks nationally recognized by The Manning Award as its “Stars of the Week.” Brown established new career-highs in passing yards and passing touchdowns in the victory.

He was the first Boston College player with three passing touchdowns and zero interceptions in a conference game since Quinton Porter in 2003 in the 41-10 victory at UVA.

Brown was the second freshman in BC history to start a season opener under center in the Sept. 1 win at Northern Illinois. He was the only freshman quarterback in school history who started to win a season opener on the road. Brown was 26-for-42 with 191 passing yards and two touchdowns in the NIU win.

Read more: Behind the rapid improvement at Boston College