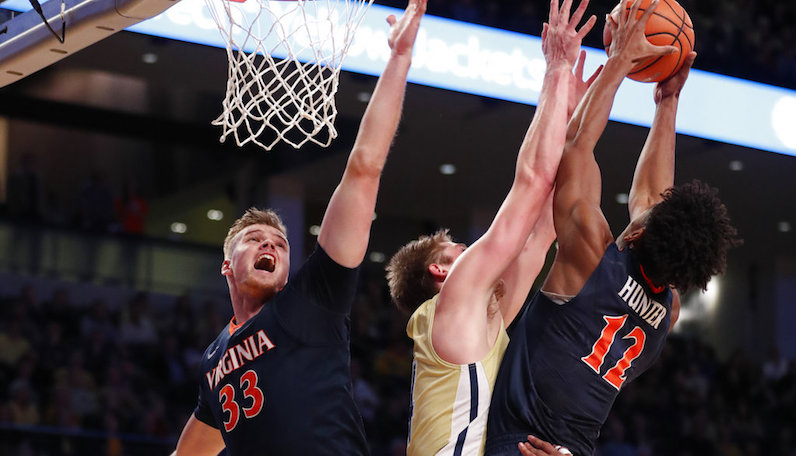 We all know Virginia’s Pack Line defense can shut teams down. The Cavaliers lead the nation in scoring defense — holding opponents to 52.6 points per game — and rank first in defensive efficiency, too, per KenPom.

But more than any other time in Tony Bennett’s nine seasons in Charlottesville, UVA has handcuffed individual stars of nearly every team it has faced. Thursday night in Atlanta, as the Cavs stayed unbeaten in ACC play, Georgia Tech’s Ben Lammers was the latest victim.

The Yellow Jackets big man finished with four points on 1 of 5 shooting from the field. That’s eight points below his season average. Virginia also held Lammers to eight rebounds.

Look at the Cavs’ past few contests, and you will see how Virginia has continually made life hell on the league’s usually productive post players.

It’s not just Isaiah Wilkins and the Cavs front court. Virginia Tech star freshman Nickeil Alexander-Walker only got off one field goal attempt versus the Wahoos and Syracuse guard Tyus Battle, who averages nearly 20 points per game, went 0 for 7 from 3-point range.

This isn’t a new trend, though

In November, All-Big Ten forward Ethan Happ managed to score 14 points when Wisconsin came to Charlottesville, but was also visibly frustrated by how difficult it was to get the ball in the lane against the Cavaliers. VCU’s Justin Tillman averages 18 points for the Rams, but had just four when the Cavs went to Richmond.

Team defense has always been a strength of the Cavaliers under Bennett, but as good as past players such as Akil Mitchell and Anthony Gill were in the post, Virginia has arguably never had an individual defender as good as Wilkins at that power forward spot.

Meanwhile, the athleticism and length of players such as De’Andre Hunter and Devon Hall causes problems on the wings.

It is getting to the point postseason awards and All-ACC recognition could hinge on who can manage a decent game against the Cavs. (*cough Jerome Robinson *cough)

Yeah, but what about THAT guy?

This all could be put to the test later this month when Virginia heads to Duke Jan. 27. The Blue Devils have no shortage of star power, but it will be particularly interesting to see if the Cavs defense can frustrate the ACC’s leading scorer and rebounder Marvin Bagley the way it has Maye and others.

No team has been able to slow down a healthy Bagley for an entire game, but he also hasn’t seen a defense like Virginia’s.

It’s all shaping up to be one of the most intriguing matchups of the year.

The Balancing Act of Virginia Basketball: An Egalitarian offense with few holes