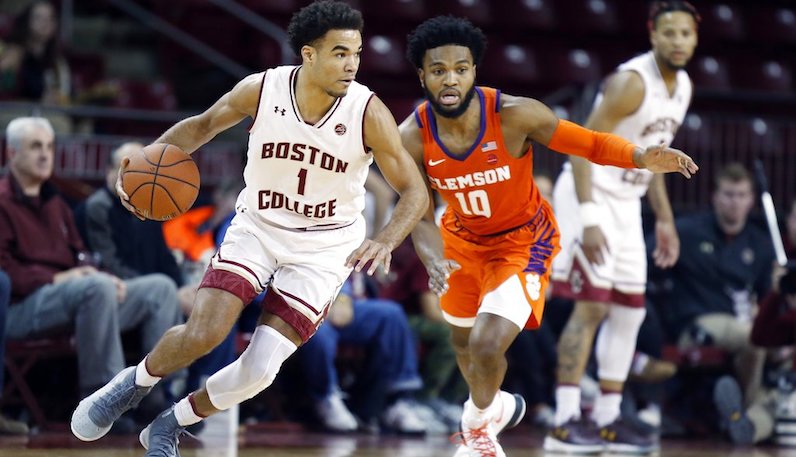 Jerome Robinson has come into his own this season for Boston College, and it couldn’t happen at a better time for Jim Christian’s club.

Boston College basketball may be another win away from truly entering the bubble conversation, but hey, let’s go ahead and just jump to some conclusions: The Eagles are the ACC’s most dangerous bubble team. There, I said it. And it felt good.

After Monday’s win over a back-sliding Florida State team, BC now has two wins over top-30 KenPom teams; it seems like it happened six months ago, but Boston College still has that early-December win over Duke in its back pocket.

The Eagles ranks 75th nationally in terms of adjusted offensive efficiency: 110 points per 100 possessions. Assuming this sticks, it will be the first time since 2013-14 that BC has finished inside the top 100 in terms of efficiency.

Now with some much-needed star power, is this the season that Boston College snaps the streak, and returns to the Big Dance?

Back me up on this

Boston College doesn’t have the most impressive overall offensive profile, and the team is a piece short after the unfortunate season-ending injury to stretch-forward Teddy Hawkins. However, this team’s backcourt gives them the chance to beat any team. It shouldn’t be too much of a surprise that this team gave Virginia a legitimate scare earlier this season.

Jerome Robinson is one of the ACC’s best all-around players, and now as a junior, his game looks to have taken another step. The 6-foot-5 Robinson can vacillate between both guard spots. After a somewhat sluggish shooting season in 2016-17, Robinson has ripped nets in BC’s first 19 games. According to Synergy Sports, he’s 25-of-53 on catch-and-shoot attempts (47.2 percent) this season — with an effective field goal rate of 69.8 percent.

He ranks 12th in the ACC in terms of efficiency on catch-and-shoots: 1.4 points per possession — just ahead of teammate Ky Bowman (1.39 points per possession). Robinson is one of six Division I players averaging 18 points, three assists and shooting above 45 percent on three-pointers.

Last season, Boston College ranked second-to-last in the ACC — and No. 252 in Division I basketball — in terms of offensive efficiency out of this type of possession: 0.71 points per possession.

It would be a bit rote to assign option numbers to Jerome Robinson and Ky Bowman. Both players averaged over 34 minutes per game, and have usage rates north of 24 percent, according to Sports Reference. Bowman can take a game over, too — just ask Duke.

The sophomore point guard has an effective field goal rate of 57.1 percent — 23rd in the ACC, minimum of 30 possessions — on spot-ups, per Synergy. Bowman is launching over six three-pointer per game, and nearly 10 per 100 possessions. He’s shooting just 33.6 percent on triples this season, which is a dip from last season. Perhaps Bowman could be in line for some positive regression.

According to Synergy, Bowman has been a passer out of the pick-and-roll 127 times this season — third most in the ACC. On those possessions, Boston College scored 130 points — 1.02 points per possession.

Sometimes it’s good to be the third wheel

One of the things that differentiates this Boston College team from maybe any other team in recent memory: a prolific third option. Jordan Chatman, the BYU transfer, spent most of the 2016-17 season as a solid sub for BC — 32 games, seven starts, 8.6 points and 41.7 percent three-point shooting. He, too, has risen his game this season, though.

Over 45 percent of Chatman’s possession are of the spot-up variety, and he’s connected on 41.5 percent on these attempts — good for 1.14 points per possession, No. 21 in the ACC, per Synergy.

He went missing in the loss to Clemson — 40 minutes, just one three-point attempt. Boston College can’t have that happen; Chatman is too good, and this team needs his shooting to augment Robinson and Bowman.

Outlook: Cloudy with a chance of…Bubbles?

Right now, Boston College sits at 13-6 and 3-3 in the ACC. KenPom projects them to win five of their remaining 12 regular season game, which would put the Eagles at 18-13 and 8-10 in the ACC. That’s not a bad resume to begin with, especially with a signature win over No. 1 Duke.

However, let’s say BC can flip one of those projected losses into a win — say a Bonzie Colson-less Notre Dame team in mid-February — and win another game up in Brooklyn at the ACC Tournament. If Boston College gets to Selection Sunday with 20 wins, a .500 record in the ACC and a victory over a No. 1 team, well, it would seem that the Eagles have a shot to get back to the NCAA Tournament for the first time since 2009.

Inside The Playbook: How Boston College and Ky Bowman torched Duke