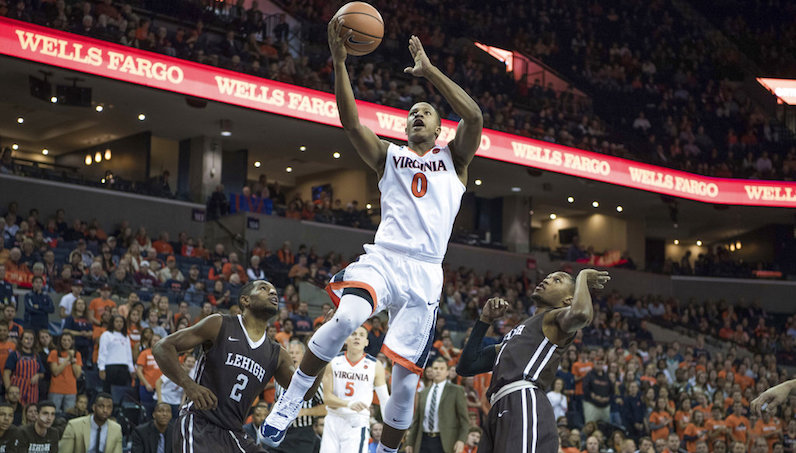 Up in Charlottesville, Devon Hall is making the most of an opportunity. London Perrantes is in the NBA; Marial Shayok and Darius Thompson transferred out from Virginia. This opened up more playing time and possessions for Hall, who is playing the best basketball of his career.

Hall is playing 27.3 minutes per game — about the same as last season — but he’s seen a major jump in his utility. The senior entered this season with a career usage rate of 16.6 percent, according to Sports Reference. That, however, has jumped to 22.3 percent this season — an above average rate.

As his usage has increased, so too has Hall’s efficiency — a critical development for Tony Bennett. Hall is shooting 43 percent from downtown and 92 percent from the free throw line; his true shooting rate of 65 percent ranks 128th in the nation, per KenPom.

How’s he getting it done?

Last season, Devon Hall shot 35.2 percent and scored 0.89 points per possession on spot-ups, according to Synergy Sports. That’s jumped to 47.2 percent (63.2 effective field goal rate) and 1.36 points per possession. Amongst ACC players with at least 20 spot-up possessions this season: Hall ranks 11th in the ACC in offensive efficiency.

Hall is a low turnover guy (9.7 percent turnover rate, per KenPom); he’s yet to turn the ball over on a spot-up possession.

One of the other areas Hall has excelled is his efficiency around the basket. As a junior, Hall shot just 42.2 percent on attempts at rim. It’s early, but this season that’s leapt to 71.4 percent (10-of-14), per Synergy.

This level of production is an absolute necessity for Virginia, too. The Cavaliers have a lot of good players, but Kyle Guy is the only plus-scorer, although I’m still holding out hope for Ty Jerome this season. Hall adds a secondary scoring punch and shot creation for Virginia; he’s one of just 13 ACC players averaging 12 points, four rebounds and two assists.