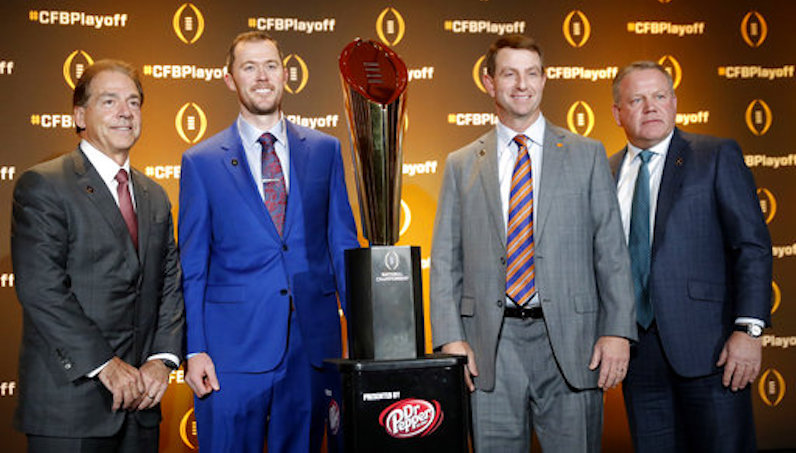 Football coaches Nick Saban, of Alabama; Lincoln Riley, of Oklahoma; Dabo Swinney, of Clemson; and Brian Kelly, of Notre Dame, from left, pose with the college football championship trophy after a news conference Thursday, Dec. 6, 2018, in Atlanta. The four teams are in the College Football Playoff. (AP Photo/John Bazemore)

Once again, the ACC is back up to four teams in the AP Poll. This week’s top 25 stays similar at the top; Notre Dame and Clemson remain No. 2 and No. 4, respectively. Ohio State, however, is close to Notre Dame at No. 3.

Following the postponement of Saturday’s Clemson-Florida State game — which has created plenty of media buzz —  neither Notre Dame nor Clemson played this weekend. UNC rejoined the AP Poll at No. 25; the Tar Heels had an open weekend as well.

No. 11 Northwestern moved up eight spots after beating Wisconsin 17-7 to improve to 5-0. Watch to see the last time the Wildcats were ranked this high and other notes on this week’s AP Top 25.

No other ACC team received a vote.

Read More on ACC teams in this week’s AP Poll

Khafre Brown steps up at wide receiver for UNC