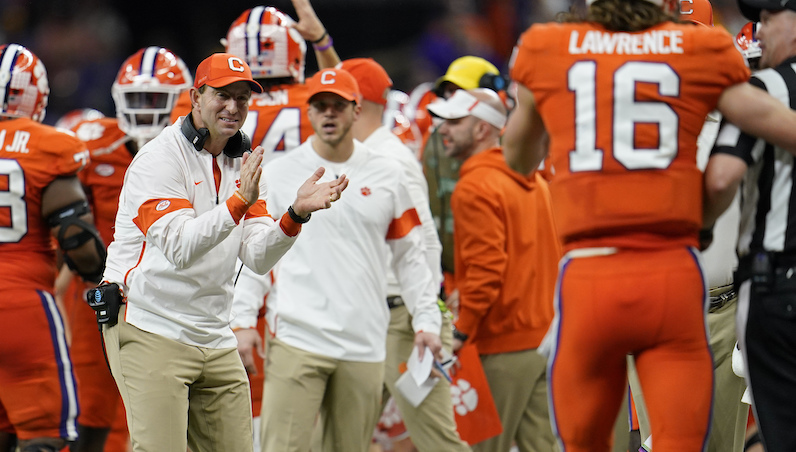 Roughly three hours before kickoff, Saturday’s Clemson-Florida State game was postponed. According to reports, a Clemson offensive lineman tested positive for COVID-19 with a test taken on Friday. Clemson, however, didn’t know about the positive result until the Tigers landed in Tallahassee.

In the hours leading up to the game, the teams’ medical personnel were unable to come up with an agreement to play the game. Florida State was worried about a potential spread.

Immediately following the decision to postpone, which included a somewhat stilted release from the ACC, players from both teams took to Twitter to express frustration. One day later, though, cooler heads have not yet prevailed, apparently. To the surprise of no one, Clemson coach Dabo Swinney is still unnerved.

While speaking with the media Sunday night, Swinney claimed that the game wasn’t canceled because of COVID-19. Swinney instead pointed the finger at Florida State’s administration.

Says if FSU wants to play Clemson, the Seminoles need to either refund travel expenses or come to Clemson to play. https://t.co/WnXTnR8cF7

Given that Clemson traveled with a symptomatic player on a plane, that’s not the most self-aware comment from Swinney, nor is it accurate.

Clemson offered to reschedule the game and play on Sunday or Monday; however, Florida State declined. If Swinney has his way — which seems to be the norm these days — that may not happen anytime soon, either.

Dabo on whether Clemson would play FSU again: “We were there. We were ready. We met the standards to play. In my opinion they forfeited the game. That’s $300,000 that’s gone out the window."

Clemson last played back on Nov. 7 — a 47-40 overtime loss at Notre Dame without Trevor Lawrence.