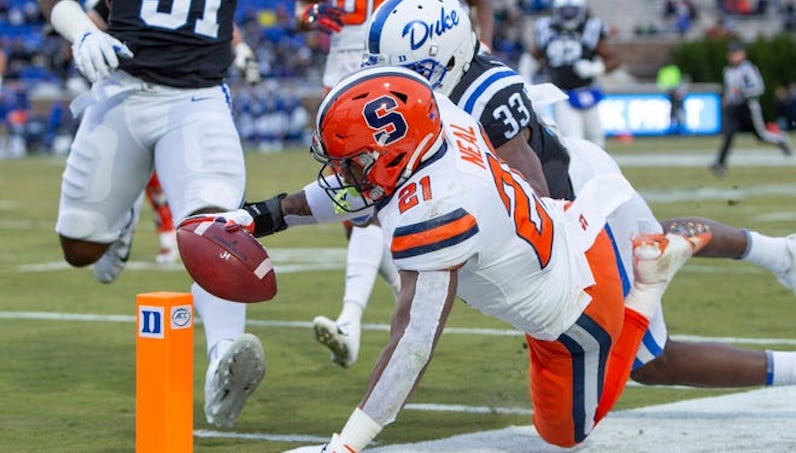 Syracuse's Moe Neal (21) dives towards the goal line during the first half of an NCAA college football game against Duke in Durham, N.C., Saturday, Nov. 16, 2019. Neal's run was ruled just short of the goal line but Syracuse still won, 49-6.

On Thursday this week, Syracuse football players decided not to practice, according to a report from The Post-Standard. Syracuse players reportedly want more frequent rounds of in-house COVID-19 testing during fall training camp.

This marks the third time in eight days that Syracuse players have sat a practice out; last Thursday and Friday (Aug. 6-7), players also didn’t practice due to discomfort with COVID-19 safety guidelines of the ACC and Liberty — Syracuse’s non-conference opponent for the 2020 fall season.

Syracuse head coach Dino Babers has stated before that his players are tested every other week during fall camp.

Source: Syracuse’s players did not practice today. They want more frequent in-house testing during the preseason.

HC Dino Babers said previously that SU has been testing every other week. The team is currently getting tested & players don’t plan to suit up until results are in.

According to Stephen Bailey of Syracuse.com, Syracuse players don’t plan on practicing until test results return. Friday’s practice is likely off the table; depending on how long it takes for results to return, Syracuse could go several days sans practice.

After sitting out practice last week, several Syracuse players and Babers have come forward with public praise for the program’s testing procedures and protocols. Their concerns stem from uncertainties at other ACC schools and Liberty.

Syracuse has committed to testing players twice weekly during the season. Late last week, Syracuse athletic director John Wildhack called on other ACC programs to do the same.

BREAKING:
Syracuse Football did NOT practice today as scheduled

SU Athletics confirmed this to me tonight

(It really does seem incredible that there isn’t some transparent, uniform testing policy as the league tries to launch a college football season amidst a pandemic. Alas.)

More reports continue to swirl out of the Syracuse football program. A group of players could potentially be prepared to opt out of the 2020 season, all together. So far, only one Syracuse player — defensive lineman Cooper Dawson — has opted out.

Many Syracuse FB players, who already have sat out 3 practices, may opt out of the 2020 season as early as today, sources tell @TheAthletic. “They have concerns about the long-term effects of the virus, and they don’t think there’s going to be a season anyway,” one person said.