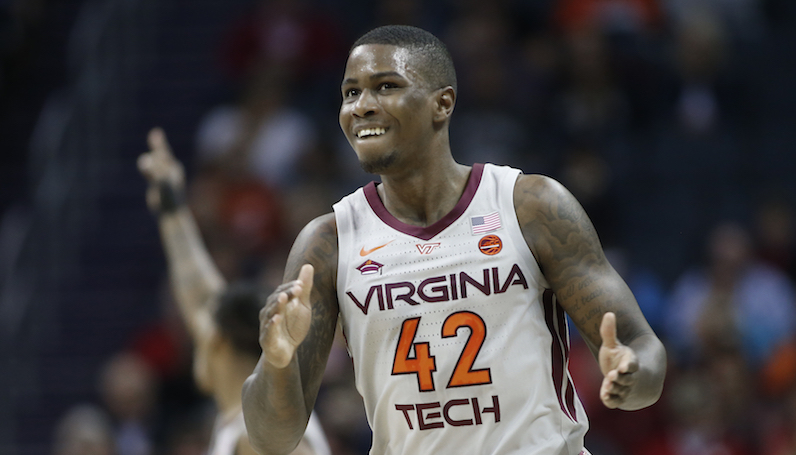 Virginia Tech's Ty Outlaw (42) celebrates after making a basket against Miami during the first half of an NCAA college basketball game in the Atlantic Coast Conference tournament in Charlotte, N.C., Wednesday, March 13, 2019. (AP Photo/Nell Redmond)

Virginia Tech received a bit of significant news on Thursday morning: Ty Outlaw, after passing a drug test, is cleared to play against Duke in the Sweet 16. David Teel of the Daily Press was the first to report the update.

Source: Ty Outlaw will play for #Hokies vs. Duke tomorrow. He passed a drug test. Statement soon from #VT.

On Wednesday this week, things looked a little dicey for Outlaw — one of the top 3-point shooters (45.6 3P%) in the country. A report surfaced noting that Outlaw was charged last Thursday (March 21) with possession of marijuana (misdemeanor). That, of course, overlapped with when the Hokies where out in California for the first two rounds of the NCAA Tournament.

According to new details, Outlaw wasn’t aware of the issue until the team returned to Blacksburg on Monday, when he cooperated with local authorities.

Here’s a statement from Virginia Tech’s Buzz Williams, which provides more information, including a third-party drug test for Outlaw, and the decision he and AD Whit Babcock made on Outlaw’s status.

Ty Outlaw is critical to this team’s half-court offense; one of the best weak-side floor spacers in the country, the sixth-year senior is prominently featured as a second-side option in Virginia Tech’s spread offense. According to Synergy Sports, Outlaw posted an effective shooting rate of 69.8 percent on catch-and-shoot attempts this season, which is a massive number.