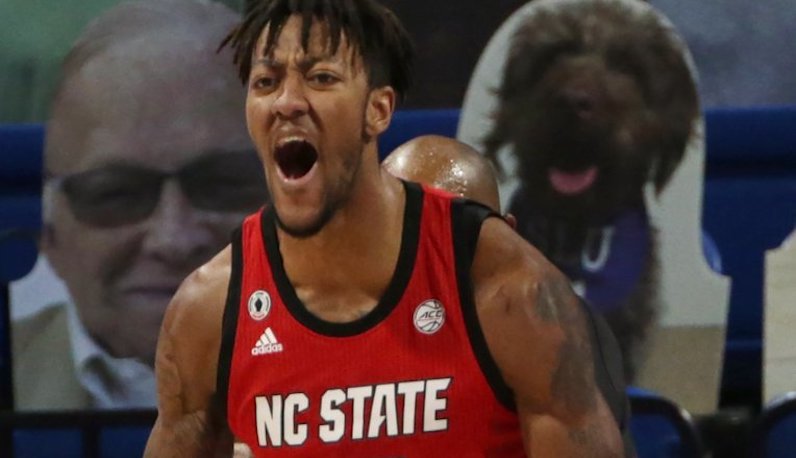 North Carolina State forward Manny Bates (15) reacts after being fouled after making a shot for a chance to make a 3-point play during the first half of an NCAA college basketball game against St. Louis, Thursday, Dec. 17, 2020, in St. Louis. (Laurie Skrivan/St. Louis Post-Dispatch via AP)

According to report from Joe Giglio of 99.9 The Fan and Inside Pack Sports, sophomore center Manny Bates is unlikely to play for NC State in the 2021-22 season.

As Giglio notes, there are two prevailing thoughts as to why NC State may lose one of the top defensive players in college basketball. One of Giglio’s sources mentions that this decision has to do with how NC State coach Kevin Keatts handled the NBA Draft process. Without more details, it’s hard to read too much into that notion.

However, another source claims that this is just the new reality of college basketball: other programs outside of NC State are promising big things and using the transfer portal as leverage. (The rumor mill suggests that this program may be Georgetown.)

One source says it is about the NBA draft process and how it was handled by Keatts/NC State.

A member of the 2018 recruiting class, Bates spent the last three years with NC State. He took a redshirt during the 2018-19 season. As a redshirt freshman, though, Bates wasted no time emerging as arguably the most productive rim protector in the country.

On both ends of the floor, Bates looked like the prototype center for how Keatts wants to play. With the Wolfpack switching 1-4 and looking to generate turnovers, Bates could lurk behind the action as the last line of defense — cleaning anything up at the rim. While mostly platooning at the 5 with DJ Funderburk, Bates made strides as a drop pick-and-roll center that season, too: the one defender who wouldn’t switch every screen.

NC State is one of the country’s top high-volume pick-and-roll offenses. Bates quickly proved to be a capable target as a screener/roller; he could also play above the rim and catch a lob. Per Bart Torvik’s shot data, Bates shot 71.1 percent at the rim — with 34 dunks. This is critical for NC State’s half-court offense.

It didn’t take a genius to see how Bates — with some development — was set for a big sophomore season. He seemed poised to make a jump. Unsurprisingly, Bates delivered.

During his sophomore run, Bates averaged 9.8 points (64.1 FG%), 5.9 rebounds and 2.7 blocks per game, while playing over 27 minutes per game. His defensive rebound rate jumped from 13.7 percent to 16.6 percent. Bates continued to block shots at a historic rate: 10.7 percent block rate, which ranked No. 18 nationally.

While the counting stats are nice and tell part of the story, his improvements went beyond. Bates posted up far more frequently and with more success: 0.89 points per possession, according to Synergy Sports. With younger playmakers running the offense, Bates solidified his presence as one of the ACC’s premier pick-and-roll targets. (Bates has good hands and can make tough catches on the move.)

Defensively, Bates continued to make strides as a drop pick-and-roll center. He’s nimble enough on his feet to play high in drop coverages — up to the level of the screen.

When NC State upset Virginia on the road in February, Bates was even used as a switch defender — a key element to how the Wolfpack schemed against Kihei Clark.

His departure should set off all kinds of alarm bells for NC State. This is an in-state player opting to leave over his continued development path in Raleigh. That’s not great — on face value at least. More importantly: With Funderburk headed to the professional ranks, Keatts would suddenly be without the only two big dudes he’s trusted the last two seasons. (The fit with Bates and Funderburk playing together was never that clean, but the Wolfpack started to click more with that duo late this season.)

Adding to the concerns: there are no obvious replacements on the roster.

Freshman center Ebenezer Dowuona played only 48 minutes this season. Jaylon Gibson, a hybrid forward, played only 80 minutes as a freshman. Neither looked very comfortable on the floor this year, either.

NC State added Providence transfer Greg Gantt, another 6-foot-8 hybrid forward, this offseason. The Pack will also bring in 4-star freshman Ernest Ross — a bouncy (and incredibly raw) 6-foot-9 power forward. Without Bates, Ross may become the starter from Day One. Given how much defensive responsibility is given to the center in Keatts’ scheme, that’s asking a lot.

According to Pivot Analysis, NC State’s defense allowed four more points per 100 possessions (109.5) with Bates off the floor this season.

On the offensive side of the court, Bates’ rim running and pick-and-roll gravity will be greatly missed. As NC State gets set to turn the offense over to point guard Cam Hayes, there were already questions as to how the Wolfpack would get north-south in the half court next season. Bates would’ve provided an important pressure point on the rim.

During the 2020-21 season, Bates shot nearly 72 percent at the rim, while recording 37 dunks. According to Synergy, Bates ranked in the 95th percentile nationally in pick-and-roll efficiency: 1.46 points per possession.

In theory, Bates could’ve augmented some of these concerns; his presence rolling to the rim would collapse help coverages and allow Hayes to spray out to open shooters. The Hayes-Bates pairing with Dereon Seabron, Jericole Hellems and Thomas Allen projected as a promising starting lineup for next season. That will change, quickly.

Devon Daniels is almost certainly gone; Shakeel Moore just committed to Mississippi State, where he’ll team up with Garrison Brooks is a Bizarro World Tobacco Road reunion. Not only is that a lot of perimeter talent headed out of the door, but Daniels and Moore were the top two slashers on this season’s roster. Hayes is super talented, but he doesn’t get to the rim like those two.

Bates and Moore were the two best NBA prospects on NC State’s roster this season. Going forward, those two seemed likely to be a dynamic duo on the defensive side of the floor; Moore, a rugged on-ball defender, would heat things up at the point of attack, while Bates shut down the lane and rim.

Moore, however, left in late April; Bates may join him soon. It’s just not realistic to easily replace this type of talent, especially at this point of the offseason. The transfer portal will close for next season on July 1. Plus: it’s not like NC State can ask for a do-over with ECU transfer Jayden Gardner, who committed to Virginia last month.

This spells trouble for an NC State program that’s yet to win an NCAA Tournament game under Keatts.

Can NC State unlock Casey Morsell as an offensive engine?