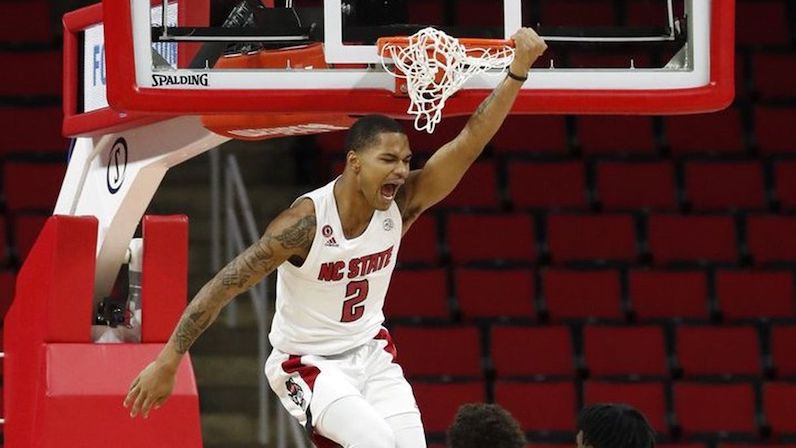 North Carolina State's Shakeel Moore (2) celebrates after a dunk against North Carolina during the first half of an NCAA college basketball game in Raleigh, N.C., Tuesday, Dec. 22, 2020 (Ethan

During his one season with the Wolfpack, Moore appeared in 25 games (two starts); he averaged 6.8 points, 1.7 assists and 1.4 steals per game.

Moore is an extremely gifted athlete at the guard position. He plays with wonderful anticipatory skills on the defensive end of the floor.

With his speed, timing and leaping ability Moore is able to bother opponents in a variety of ways. As a freshman, Moore emerged as one of the top steals guys in the country: 4.4 percent steal rate.

When Devon Daniels went down for the season, Moore took on more of the team’s playmaking share, while managing the point guard position with fellow freshman Cam Hayes.

A scenario existed where Hayes and Moore could grow together as a twin-point guard backcourt — sharing creation efforts. (In fact, I was quite bullish on this as a development tandem.) No program in the ACC runs more spread pick-and-roll efforts; there are plenty of ball-handling opportunties to go around. The 2021-22 season could’ve been Moore and Hayes taking turns as the primary creator. Moore has good vision as a passer and he’s athletic enough to get to the rim. There’s a lot of talent here.

However, with those two coming in together in the same class, perhaps is was destined that one guy would win out, while the other looked elsewhere. With Moore gone, Hayes is the guy in Raleigh now.

On top of that, NC State has two more guards entering the program in the 2021 class: 4-star Terquavion Smith and 3-star Breon Pass. Smith and Pass — like Moore and Hayes — both hail from the state of North Carolina.