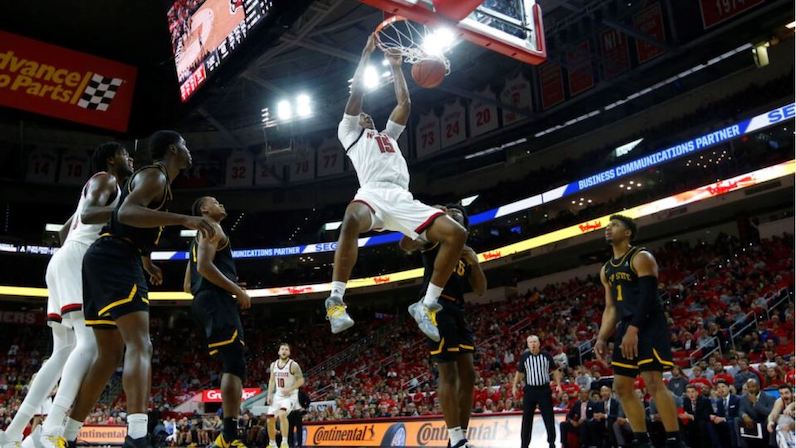 Earlier this offseason, I put together a detailed scouting report on Manny Bates. (Go back and read that if you haven’t already!) The piece outlined how Bates emerged as one of the more interesting defensive prospects in the ACC. A powerful rim protector with gaudy blocks numbers, Bates possesses a discrete set of skills that makes for a good two-way fit in NC State’s scheme while scaling (eventually) to the professional ranks, too.

Bates has aspects of his defensive game that need improvement; he can tighten up his pick-and-roll defense (Clemson’s Aamir Simms gave him a lot of trouble), though he showed real promise last season as a drop coverage center with some mobility. Bates generally takes a good initial ball-screen position, which helps, considerably.

There were issues with fouls, too: Bates committed 6.4 fouls per 40 minutes in league play. He’s an aggressive rim protector that wants to contest shots; that’s a good mindset for Bates to have. However, it can also produce early foul trouble, especially for a young frontcourt player. (The Wolfpack also ranked outside the top 230 nationally in 2-foul participation last season: starters that picked up two fouls in the first half of games played just 14.7 percent of available minutes before halftime, per KenPom.)

DJ Funderburk is an excellent defender as well; he can switch across multiple positions and is more than capable of holding down NC State’s half-court defense (3.2 percent block rate) as the lone big.

But Bates is an elite deterrent around the rim for the Wolfpack; the more Kevin Keatts has that element on the floor and at his disposal, the better.

Digging through the numbers a little more — using the Hoop Explorer on/off tool — adds even a little more context to Bates’ defensive impact. After filtering out games against opponents outside the top 200 and minutes with walk-ons on the floor, NC State’s defense is significantly better in a couple key metrics with Bates on the floor.

The defense recorded an adjusted defensive rating of 92.5 points per 100 possessions with Bates on the court, which is excellent. During those minutes, opponents posted a measly effective shooting rate of 44.2 percent, while shooting just 44.6 percent overall on 2-point attempts.

Focusing in further: we can see just how crucial Bates is around the basket. With Bates on the floor, less than 39 percent of opponent field goal attempts come at the hoop; that number jumps closer to 43 percent with Bates parked on the bench.

When Bates was out of the game, opponent shot nearly 52 percent on 2-point looks; this is due, in part, to a 60 percent clip at the rim. However, when Bates is in and patrolling the paint, that statistic plummets to 52.8 percent. In the words of the great Ian Eagle, “Do NOT go in there!”

It takes two to make a thing go right

Context is certainly important; these things shouldn’t be boiled down to just one player or one lineup. There are a variety of factors that get baked into this cake.

With an improved shot profile, Devon Daniels really emerged last season as a two-way wing: capable of running an efficient pick-and-roll and spearheading NC State’s defense with ball pressure at the point of attack.

On a related note, this is where Nebraska transfer Thomas Allen — high steal rate (2.6 percent), low foul rate (1.4 fouls per 40 minutes) — can make a difference as well. During the 2018-19 season with the Cornhuskers, Allen showed his mettle as a strong pick-and-roll guard on defense.

Allen can get skinny and fight over screens while using his quick hands to challenge for steals and deflections. This makes him a strong defender in rearview pursuit, which should pair nicely with Bates as a drop center.

With all of their switching and a commitment to running opponents off the 3-point arc, the Wolfpack want to make teams beat them with off-dribble shots — preferably in the less-efficient midrange area. During the 2019-20 season, opponents assisted on just 43.3 percent of their field goals against NC State.

The 2019-20 campaign also marked the second time in three seasons with Keatts as coach that NC State’s defense posted an opponent 3-point attempt rate of under 33 percent.

Funderburk is long, mobile and an effective communicator on defense, which allowed NC State to mostly stick with its 1-4 switch scheme, despite slightly different personnel. Those lineups produced some good defense for the Pack, too.

It’s on the other end, however, when things became more of a challenge in NC State’s spread pick-and-roll offense.

Over the course of two seasons with NC State, Funderburk has kicked the can on trying to work in a 3-pointer, but he’s just 11-of-45 (24.4 3P%) from downtown. Funderburk can do some stuff with the basketball; he’ll flash a Euro step in transition or secondary offense, from time to time.

In the half court, though, things can bog down. It’s not as if Funderburk can initiate offense against a set defense. All of a sudden, NC State has two non-shooters and only three ball handlers on the floor, which can clog lanes to the basket — with another big man in the dunker spot. It also makes it easier to trap pick-and-roll operators.

Overall, it becomes less of a challenge to rotate and squeeze NC State’s half-court attack, which (by design) lacks ball movement and off-ball actions.

On paper, NC State has a good deal of lineup flexibility for the 2020-21 season. Funderburk and Bates remain as the two centers; however, there’s good depth on the wing, which should allow for more 4-out lineups and minutes staggering at the pivot.

But Funderburk and Bates will likely be two of NC State’s five best players; if Keatts wants his top five on the floor, those two will play together.

Playing those Bates and Funderburk together may require a little more creativity in the half court; straightforward pick-and-roll can work, but there are risks. The Wolfpack dabbled with a little high-low action between the two last season — without much success.

Funderburk discovering a credible 3-point shot would certainly go a long way. That addition would prove beneficial not only for NC State next season, but also for Funderburk’s prospect profile. At this point, though, it’s all hypothetical.

Regardless, here’s a non-hypothetical: with Manny Bates, NC State has the top returning rim protector in college basketball — someone capable of administering rejection at the rim, while looking for lobs and dunks of his own on the other end.