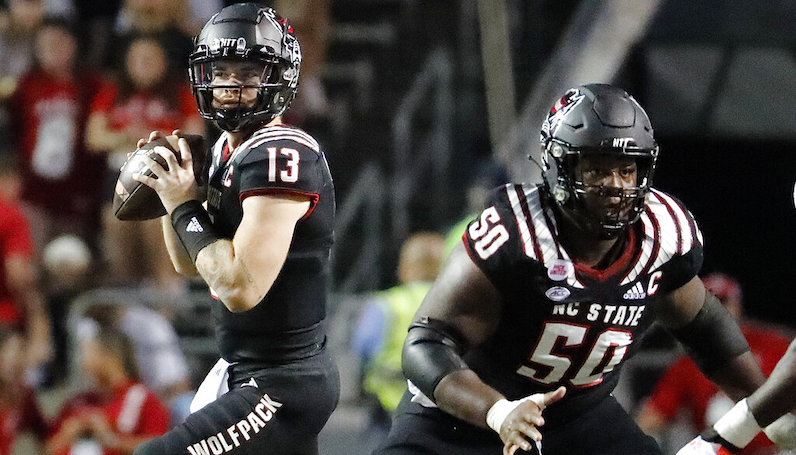 North Carolina State's Devin Leary (13) looks to pass the ball while under the protection of Grant Gibson (50) during the first half of an NCAA college football game in Raleigh, N.C., Saturday, Oct. 2, 2021. (AP Photo/Karl B DeBlaker)

NC State football continues to circle the wagons. Over the last few weeks, a group of veteran players have elected to return to Raleigh for the 2022 season. Grant Gibson, a captain and a three-year starter at center, will return for 2022 as well.

Most of the high-profile returnees for NC State have come on the defensive side of the ball: linebackers Isaiah Moore and Payton Wilson, defensive backs Cyrus Fagan and Derrek Pitts, and All-ACC defensive lineman Cory Durden.

Assuming quarterback Devin Leary returns, too, NC State will bring back all four of its team captains from the 2021 season.

Gibson, who is the grandson of Harvey Gantt — the first black student to enroll at Clemson and the first black mayor of Charlotte, is one of the best centers in the country. He’s been been a key cog in NC State’s offensive line play dating back to the 2019 season.

During the 2018 season, Gibson split time playing defensive tackle, offensive line and on special teams. A 3-star recruit in the 2017 class, Gibson picked NC State over UNC, Georgia Tech, Louisville and Tennessee; he redshirted in the 2017 season.