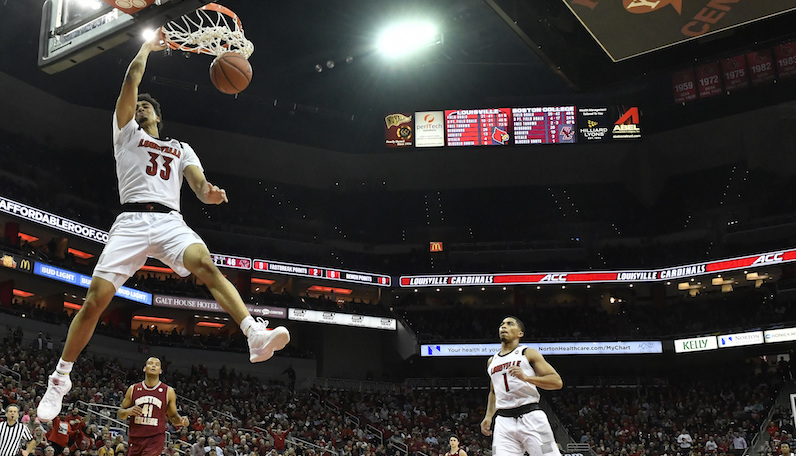 Late Wednesday night, Louisville Basketball got what will likely be the biggest news it receives this offseason. All-ACC forward Jordan Nwora withdrew from the 2019 NBA Draft, and will return for his junior season.

Louisville’s Jordan Nwora announces he is returning to school. HUGE for the Cards.

After a solid yet limited freshman campaign, Nwora made a big leap as a sophomore under Chris Mack. As his minutes jumped — along with his usage rate (26.1 percent) — so, too, did his production: 17 points, 7.6 rebounds and 1.3 assists per game.

Nwora’s attempted five free throws per 40 minutes (76.5 FT%); he also posted an impressive defensive rebound rate of 21.7 percent. However, the name of his game is bombing from deep. During his two seasons at Louisville, over 47 percent of Nwora’s field goal attempts have been of the 3-point variety.

Mack and Louisville love to run this little series of actions at the elbow to get Nwora pitch-back catch-and-shoot 3-pointers. According to The Stepien’s shot chart feature, Nwora hit 38.7 percent of his NBA-range 3-point attempts (155 3PA).

Nwora has some off-dribble spunk to his game, too, though. Closeout too hard or gamble for a steal, and he can blow by for rim finishes. Overall last season, Nwora had 29 dunks (1.1 per 40 minutes) and shot 63.4 percent around the rim.

This is a serious growth opportunity for Nwora. His defense is mostly fine (it needs work, too), and he has NBA 3-point range. What his offensive profile needs is more shot diversity. Can Nwora develop touch in the middle areas of the floor, after he’s run off the line? If he can’t get all the way to the rim on a straight line, how does he counter?

These are things Nwora must address as he now sets his eyes on the 2020 NBA Draft. He will be one of the ACC’s top prospects next season.

Invited to this year’s NBA Draft Combine, Nwora didn’t participate in the 5-on-5 portion of the event, due to a reported calf injury. He seemed like the one ACC combine invite that could actually consider returning to school, which is exactly what he decided to do — hours before the NCAA’s deadline.

One day prior, Louisville also received word that veteran center Steven Enoch also pulled his name from the draft and will return for his senior season. Enoch isn’t the same caliber of prospect as Nwora, obviously; however, he’s a productive rotation big in the ACC, which matters.

With those two back, along with do-it-all wing Dwayne Sutton, and the nation’s No. 11 recruiting class, Louisville is poised for a big season in 2020.

Bart Torvik’s site currently has Louisville ranked 5th nationally in his adjusted efficiency margin projections for next season. That’s the highest ranking for any ACC team — just ahead of UNC.

Six weeks ago, Louisville had 15-1 odds to win the 2020 NCAA Tournament. With rosters mostly set for next season, and Nwora in the fold, don’t be surprised to see Louisville jump higher as a serious title contender.