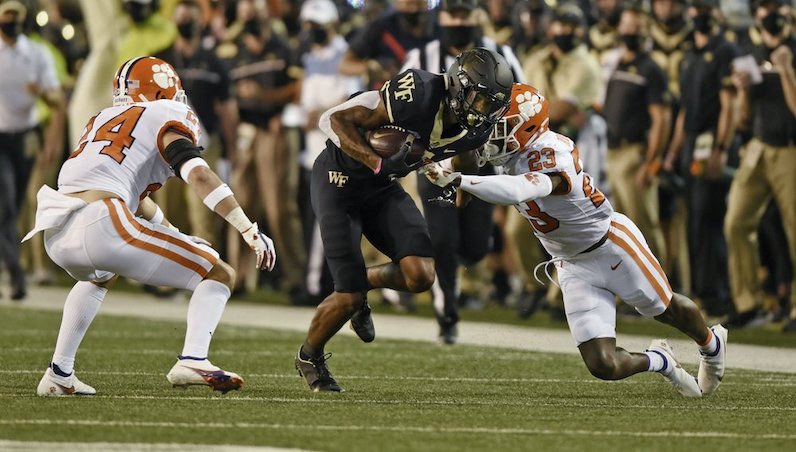 Every week during the 2020 football season we will highlight five rookies in the ACC that put together standout performances the previous weekend. Let’s jump right in after the first week of games, starting with another pass rushing duo at Clemson.

Asked Bryan Bresee if he'd gotten any work in Clemson's jumbo package: "You'll have to wait and see." 👀

In recent years, the Tigers have been known to churn out of some of the most talented defensive lines in college football; that trend looks to continue.

Murphy hit the ground running; during the win over Wake Forest, the 6-foot-5, 260-pound rush end recorded two sacks and three tackles for loss (29 snaps). Bresee played 35 snaps and picked up a half-sack, too.

Both guys will continue to have opportunities to shine in Clemson’s system. Sophomore defensive tackle Tyler Davis, who left the Wake game with an injury, will miss this Saturday’s matchup with The Citadel.

It wasn’t until late last week that Georgia Tech announced its starting quarterback for the 2020 opener: true freshman Jeff Sims. The former Elite 11 quarterback beat out veteran James Graham, who had some nice moments for the Yellow Jackets in a transient 2019 season.

Sims, a 4-star prospect who hails from Jacksonville, de-committed from Florida State last December — less than a week after Mike Norvell was hired. This certainly made for an interesting set of circumstance on Saturday.

During his debut, Sims completed 24-of-35 pass attempts (68.6 percent) — spread around to 10 different receivers — for 277 yards (7.9 yards per attempt), one touchdown and two interceptions. Sims also ran for 64 yards. In doing so, Sims became the first Georgia Tech quarterback since 2016 to threw for more than 250 yards and run for 50 yards in the same game.

And while Sims looks like the future of the quarterback position for Georgia Tech, his game off the field, on the recruiting trail, seems promising, too.

Spot on take here. Jeff was a popular, likable figure on the 7s circuit. Plenty of top skill players across the Sunshine State know him. https://t.co/KxwIYt0pQp

The 2019 season brought on one of the most prolific offenses in program history; Wake Forest used tempo, dynamic two-way quarterback play from Jamie Newman and a trio of talented receivers to fly up and down the field.

Newman left for UGA after the season; Scotty Washington and Kendall Hinton completed their eligibility. Sage Surratt decided to return for the 2020 season; however, in August, Surratt chose to opt out. Surratt joins Newman in getting ready for the 2021 NFL Draft.

This has left an obviously major void in Wake Forest’s pass game. Quarterback Sam Hartman is talented and experienced, but he’ll need his perimeter targets to step up.

In the Clemson game, redshirt freshman receiver Taylor Morin, the team’s punt returner, caught a game-high nine passes for 93 yards and a touchdown. Morin caught at least one pass from all three Wake Forest quarterbacks that saw time against the Tigers: Hartman, Michael Kearn and Mitch Griffis.

Technically speaking, Wake Forest’s Donavon Greene is about as experienced as a college football freshman can be. Greene saw action in four games during the 2019 season, catching 13 balls for 249 yards (172 of which came at Syracuse) and two touchdowns; he even started in the Pinstripe Bowl against Michigan State.

However, since he played in only four games, Wake Forest preserved Greene’s year of eligibility. Back as a redshirt freshman in 2020, snagged three passes for 76 yards against Clemson.

Clemson remains No. 1 in new AP Poll, joined by 6 other ACC teams