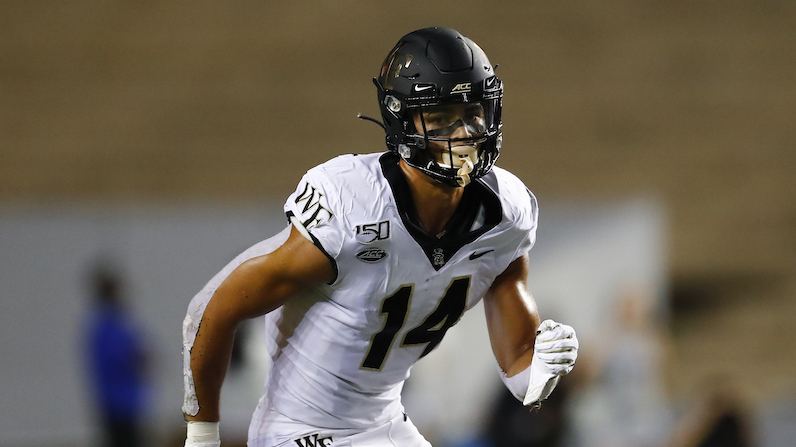 As Wake Forest has raced out to a 2-0 start, quarterback Jamie Newman has taken to the center of the stage. Newman, through two games, is averaging 9.6 yards per pass attempt; he ranks No. 8 in the FBS by throwing for 356.5 yards per game. Newman currently stands at No. 1 in the nation in terms of expected points added on pass plays (22.1), according to ESPN. All of that is great, obviously. However, this isn’t a one-man production, either.

As Wake Forest gets set to host North Carolina in one of the program’s biggest early-season games in recent history, it’s worth noting just how well the team’s receivers have worked in concert with Newman. And at the top of that list you’ll find Sage Surratt and Scotty Washington.

According to Sports Reference, there are currently 15 FBS receivers in the 2019 season with at least 10 receptions, averaging 15+yards per catch and at least two touchdown receptions. Three of those players are from the ACC, including Surratt and Washington — one of two sets of teammates on the list.

The fact that Wake Forest is having this type of success throwing the ball after Greg Dortch departed for the NFL is quite impressive.

If Newman recognizes that Surratt or Washington have favorable coverage, he’s more than willing to throw the ball up or to their back shoulders, and let them make a play.

All three of Washington’s touchdown receptions have come on some type of jump ball. And why not? If you have to small forwards out there at wide receiver, let them go up and make plays. It’s just nice to see Washington back, healthy, and producing after a tough 2018 season.

Surratt already has nine receptions of 10+ yards this season, which is tied with Miami’s Brevin Jordan for tops in the ACC.

Converted quarterback Kendall Hinton has added to the passing game, too. He pulled down the game-winning touchdown catch against Utah State. For the season, he has 11 receptions for 110 yards and a touchdown.

With Washington, Surratt and Hinton, Wake Forest joins just LSU and pass-happy Washington State as the only three FBS programs with three receivers averaging 10 yards per catch (minimum 10 receptions) and at least one touchdown catch, too.

There’s also Steven Claude who, after a career spent mostly on special teams, has contributed, too. Claude has seven catches for 78 yards.

Wake Forest up to No. 3 in this week’s power rankings