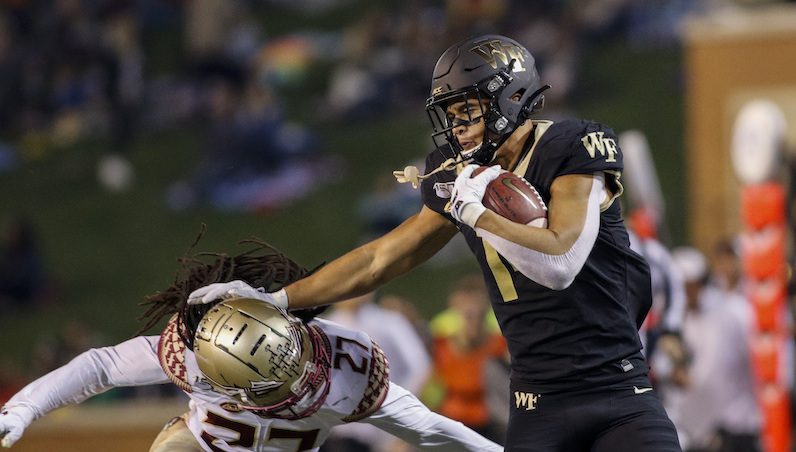 The roller coaster that is ACC Football in 2019 took another twisty turn over the weekend, though things feel a little more settled with wins from Wake Forest and Virginia. And hey, Georgia Tech won an ACC game! That’s kinda neat.

To make sense of everything, here are this week’s ACC Football Power Rankings.

Clemson played sluggish for chunks of time in the win at Louisville, and the passing game still looks like it’s missing a gear or two, despite some splendid play from wide receivers Tee Higgins and Justyn Ross. Trevor Lawrence had some good moments in this game, but he continues to force ball into coverage

Travis Etienne was masterful, however. The junior running back carried the ball 14 times for 192 yards (the third highest rushing total of his career) and a 49-yard touchdown. Etienne now has four carries of 40+ yards this season, which is tied for No. 1 in the ACC.

This is the eighth time in Etienne’s career that he’s run for 150+ yards and a touchdown in a single game. Etienne also now has eight career games of rushing for 100+ yards on 15 or fewer carries. Up to this point, he’s been the ACC’s best offensive player in 2019.

Up next: Boston College

Saturday’s win over Duke, which turned into a bit of a blowout, looks a lot like the blueprint we expected to see from Virginia this season. Granted, the offense (No. 63 nationally in efficiency) recorded just 4.45 yards per play — a season low. However, Bryce Perkins did what he could, rushing for three more touchdowns — all from inside the 5-yard line.

Joe Reed did Joe Reed things, too: his second kick return for a touchdown this season, and the fifth of his career.

Defensively, Virginia was dominant, which is this team’s calling card. The Cavaliers recorded five tackles for loss and forced five turnovers.

Even after the defeats at Notre Dame and Miami, Virginia is still right on schedule this season. The next two weeks will be tough, though — at Louisville and at UNC. This team will continue to miss Bryce Hall as well.

Up next: at Louisville

Last Friday’s victory over Syracuse was far from pretty; however, cliched as it may sound, a win is a win, especially in the ACC.

Damar Hamlin has been the best player on the field

Now at 5-2, with a top-25 defense, Pittsburgh is fairly well-positioned in the conference. The penalties (8.7 per game, 13th in the ACC) are an issue — eight for 79 yards against Syracuse — but the Panthers did get 103 rushing yards for AJ Davis, the first 100-yard game of his career.

Playing without Jamie Newman, Wake Forest received a gutsy performance off the bench from Sam Hartman in a wild win over Florida State: 308 passing yards, 8.1 yards per attempt. Sage Surratt posted his fourth game this season of 150+ receiving yards — the most in the FBS: 170 yards on seven grabs. Surratt now has 19 receptions of 15+ yards this season, too.

Kendall Hinton continues to thrive in the latest chapter of his college career; over the last two weeks, the former quarterback has caught 20 passes for 227 yards.

This is something to keep an eye on, though.

Wake coach Dave Clawson said they will need to wait for the MRI results, but that they are 'very concerned' about Justin Strnad's injury.

Going up against Clemson is a mostly impossible task, but Louisville held its weight, for the most part, on Saturday. Losing by 35 points isn’t much fun, but it’s a world away from last season’s 77-16 debacle under Bobby Petrino.

At times, especially in the first half, Louisville’s defense put Trevor Lawrence in some tough situations, picking off two passes.

Once again, Javian Hawkins was superb — rushing for 129 yards and a touchdown on 26 carries. After his fourth performance of 120+ rushing yards, Hawkins is now one of four ACC players averaging over 100 rushing yards per game and five yards per carry.

Javian Hawkins has ended Clemson's 27-game streak of not allowing a 100-yard rusher.

Next week is big.

What looked to be a rock fight at Scott Stadium turned into a blowout win for UVA, thanks to five Duke turnovers and miscues on special teams.

Duke's last 11 drives going back to halftime of the Georgia Tech game:

Up next: at North Carolina

It’s been a while since Virginia Tech has won three straight games, but after the absurd six-overtime win against UNC on Saturday, the Hokies get to enjoy that achievement for the first time since 2017.

#Hokies have played in the two longest games in @ACCFootball history, both at Lane Stadium.

Quincy Patterson finished the thrilling victory at quarterback for Virginia Tech, but all three quarterbacks, including Ryan Willis, had moments for the Hokies.

Virginia Tech’s offense has benefitted greatly from the returns of wide receivers Damon Hazelton Jr. and Tre Turner, who combined for three touchdowns on Saturday. That included Hazleton’s miraculous 18-yard touchdown catch on 4th down, which helped force a third overtime.

There’s no official word yet on Hendon Hooker’s status as Virginia Tech heads into another open week. Patterson showed some good stuff in this game, though. After the week off, it’s Notre Dame.

Saturday up in Blacksburg was one for the record book for North Carolina, although the Tar Heels would’ve preferred a different result. Sam Howell was excellent, once again: 348 passing yards, five touchdowns and zero interceptions. Howell is now up to 88 completions of 10+ yards and 27 completions of 20+ yards, both of which lead the conference.

North Carolina (3-4) is now 2-4 in one-possession games. Those four defeats have come by a combined 12 points.

All along, as Miami struggled with passing efficiency and penalties this season, it still seemed like this Hurricanes team could turn a corner. There’s talent on this roster — plenty of which still remains from last season’s dominant defense, too. However, the loss at home to Georgia Tech — which included three missed field goals, all inside of 35 yards — is a serious reality check.

Manny Diaz: "You can see the promise of the future and the ugliness of the present. This is a rebuild."

There’s a chance for Miami to still cobble together a decent 2019 season, but the next three weeks are tricky: if Miami strikes out over this stretch, things could get real, reeeeal ugly.

Up next: at Pittsburgh

What needs to be said about Florida State has already been said: this is turning into a bit of mess with Willie Taggart in Tallahassee. Over the weekend, as usual, Florida State looked disjointed and unprepared to handle a game on the road. Things, by the way, aren’t going great with James Blackman at quarterback, either.

Taggart says he likes what James Blackman did overall tonight. Wanted to ride the starter and stop rotating.

With all of that in mind, let’s try to focus on some of the good and remain semi-positive here: Cam Akers is awesome.

Welcome to the party, David Bailey! There are plenty of snacks and drink in the back; make yourself at home, please. Boston College ran all over NC State on Saturday, and it was more than the usual one-man show with AJ Dillon, though Dillon was excellent, too. Bailey snapped off a wonderful performance in a secondary role.

This game marked just the 32nd time since the 2000 season that an ACC team has run for 400+ yards and five touchdowns in the same game. (Of those 32 performances, Georgia Tech and Paul Johnson are responsible for 18. Ha.)

Up next: at Clemson

There’s a lot that went into NC State’s ugly 45-24 blowout loss at Boston College — a game the Wolfpack were favored to win. NC State’s defense, which is dealing with several injuries to key players, was trounced.

Greetings from my favorite press box in the ACC.

Some injury/personnel notes before NC State grapples with Boston College at noon:

On the other side of the ball, Bailey Hockman really struggled in all phases of the passing game. It looks like it’s now Devin Leary’s turn to run the offense, especially with an open week to prepare for Wake Forest.

So far this season, NC State has only three completions of 40+ yards, which ranks last in the ACC; two of those are from McKay, the other is courtesy of Leary. It’s time to open up the playbook.

Georgia Tech has completed only four passes of 40+ yards so far this season. This 41-yard touchdown pass from punter Pressley Harvin III to Nate Cottrell is one of them. Believe in your dreams, kids.

This season has turned into a bit of a mess for Syracuse, which has yet to land a win over a Power Five opponent. Dino Babers is known for building offenses, but Syracuse has struggled to run block and protect the passer.

“Right now everybody’s job is in jeopardy. We need to go back and watch the tape. It’s not fair to keep playing the same guys if the result doesn’t change.” Watch Dino Babers' postgame news conference after SU's loss to Pitt. pic.twitter.com/y2U2uMUAKU

Up next: at Florida State

Follow the leader: Isaiah Simmons continues to pave the way for Clemson’s defense