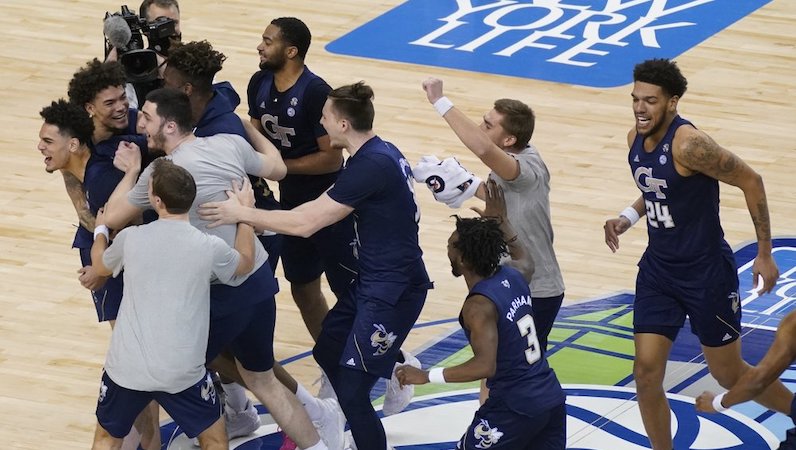 Michael Devoe, the MVP of the 2021 ACC Tournament, will declare for the 2021 NBA Draft, while retaining his college eligibility.

As a junior, Devoe was a critical piece for Georgia Tech, which won an ACC title and went to the program’s first NCAA Tournament in over a decade. The 6-foot-5 lefty averaged 15.0 points, 3.4 assists and 1.3 steals per game.

During his three seasons with Georgia Tech, Devoe has appeared in 86 games (77 starts). A key source of offense in Atlanta, Devoe has 1,149 career points and 265 assists to his name.

Georgia Tech's Michael Devoe will declare for the 2021 NBA Draft while retaining his eligibility, per release. Bubba Parham is returning to school and exercising his additional year of eligibility.

One of the top combo guards in the ACC, Devoe is an excellent shooter (40.7 3P% career); he can handle and pass, too. Devoe doesn’t have elite burst or vertical athleticism, but he’s crafty and plays with solid court vision. Devoe can spot weak-side shooters while driving to the hoop off a live dribble.

This opportunity will allow Devoe to receive valuable feedback, while keeping the door open for his senior season with Josh Pastner. Devoe would rather return and finish his degree at GT than opt for the G League path, according to reports.

Like any other ACC program, Georgia Tech’s roster is a bit of mystery. Veteran guard Bubba Parham will return. However, other program stalwarts have decisions to make: ACC Player of the Year Moses Wright, Jose Alvarado and Jordan Usher.

Wright is a fringe NBA prospect, too. His stock will likely never get higher. Alvarado is in a similar boat, though less of a prospect. Usher is a wonderful athlete with some skill. If Wright goes pro, Georgia Tech will really need Usher to remain in Atlanta.