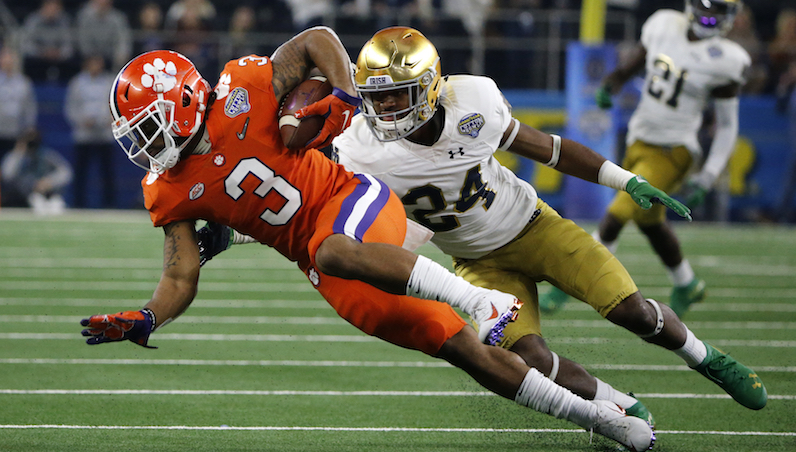 For months now, those involved in the decision-making process have tried to game out how a 2020 college football season could possibly take place. With America failing on multiple levels to prevent and contain the spread of COVID-19, college sports are faced with the reality of trying to get a football season off the ground amid a global pandemic. For so many different reasons, it’s far from ideal.

Could the season start later? What if students aren’t on campus in the fall? What should be done about out-of-conference opponents? When will programs report back to campuses? How serious are the health risks? Is this morally acceptable? Should the season be held off until the spring of 2021? Should the season even be played?

While there publicly appeared to be some inter-conference coordination among Power Five leagues, the Big Ten took matters into its own hands. Last Thursday, the Big Ten decided to move to a conference-only schedule for the 2020 season.

Not long after that, another report surfaced: the ACC intended to do the same. However, secondary reporting indicated that while the ACC will consider adopting a conference-only schedule for football, nothing is final — yet.

At this time, the ACC is still considering all options. No announcement forthcoming.

ACC commissioner John Swofford, who recently announced his plan to retire after the 2020-21 school year, said if the ACC goes with a conference-only schedule for the 2020 football season, that Notre Dame — a partial member of the ACC, which remains independent in football — will be involved.

Six ACC teams are already on Notre Dame’s schedule for 2020: Wake Forest, Pitt, Duke, Clemson, Georgia Tech and Louisville. However, if the league goes through greater efforts to bracket the league, that could be reshuffled, too.

According to Joe Giglio of 99.9 The Fan, one potential model on the table for the ACC looks like such: 10 games for each ACC team, with the league split into three separate pods of five teams, each. In this scenario, Notre Dame would be included and considered as the de facto 15th team.

One scheduling model on the table for the ACC:

Ten games but not 10 individual games, rather a home-and-home between five teams.

Notre Dame would be included and count in the ACC standings

There wouldn't be any other games against teams outside the league

Giglio added greater context, though. From those five-team pools, each program would play the other four teams in a home-and-home series — essentially eight “conference/league” games. This way, ACC football teams would still hit their eight-game schedules, albeit in bizarre fashion.

Under this proposal, the groups of five teams would be as regionalized as possible. (Good luck to the four teams stuck with Clemson, and hello, NC State fans!)

To round out the schedule, the other two games — Games 9 and 10 — could come against another ACC opponent from a different bracket. However, those games wouldn’t go towards a team’s conference record. This specific approach would essentially function in a way similar to the 2019 North Carolina-Wake Forest matchup. As you may recall, the two I-40 rivals met in a non-conference game last September.

Further, as Giglio notes, in this one proposal, there may still be some cross-conference mingling; the ACC and SEC could potentially keep some rivalry matchups, like Georgia Tech-Georgia, Louisville-Kentucky, Clemson-South Carolina and Florida State-Florida.

… and the other two games could be like UNC/Wake last year that don’t count in standings or could be they work out an agreement with SEC to keep some of the rivalry games.