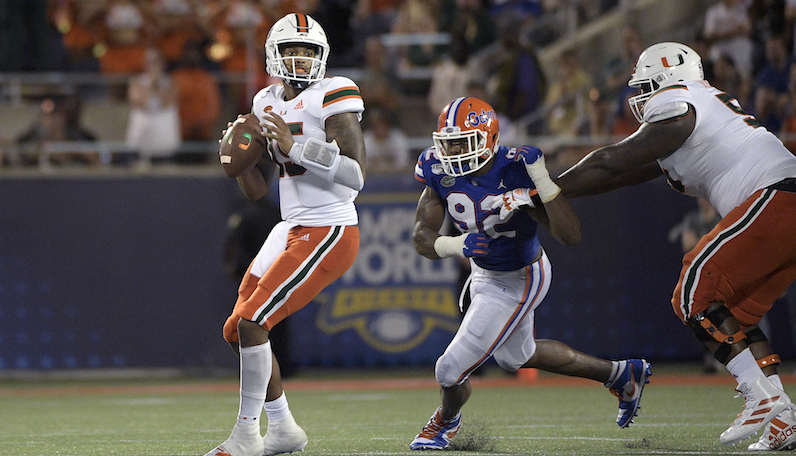 After entering the NCAA transfer portal back in January, former Miami quarterback Jarren Williams may have found his new home. In the corners of College Football Twitter, there’s speculation Williams will transfer to Western Kentucky, coached by Tyson Helton.

Nothing is official yet, though.

A former 4-star quarterback out of Georgia, Williams committed and decommitted to/from the University of Kentucky on multiple occasions while in high school.

Williams finally committed to Miami in Nov. 2017 and signed with the Hurricanes during the Dec. 2017 early signing period. He appeared in one game during the 2018 season and took a redshirt.

Two weeks prior to kicking off the 2019 season against Florida, Manny Diaz named Williams his starting quarterback. Williams beat out Ohio State transfer Tate Martell and N’Kosi Perry for the job. Williams started the first give games of the season — until a shoulder injury (suffered in the Virginia Tech game) forced him out.

Perry got a chance to run things as the starter for a little while; in his first start of the season, Miami beat Virginia on a Friday night.

QB A is Jamie Newman, Georgia’s new star QB and future first round pick, who was admittedly banged up and without his top 2 WRs.

QB B is Jarren Williams, Miami’s terrible QB who is gonna get benched and led the most listless offense I’ve seen in years down the stretch.

Williams entered the NCAA transfer portal in late January, less than a week after D’Eriq King announced his decision to transfer from Houston to Miami.