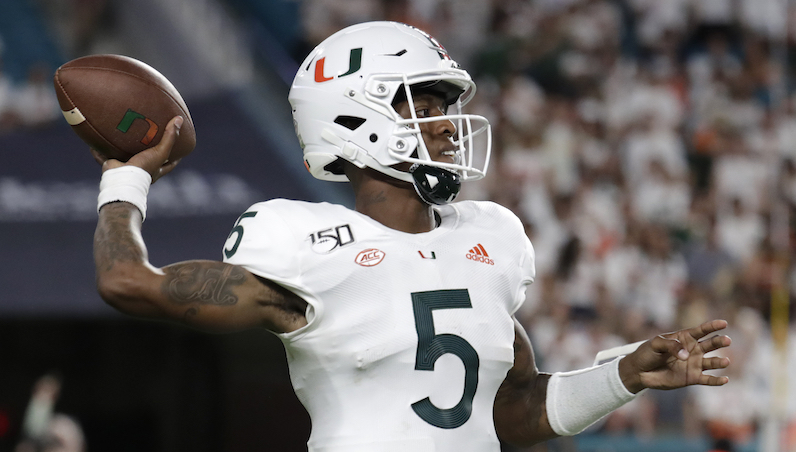 Jarren Williams, who started the first five games of the season, missed last Friday’s win over Virginia with a shoulder injury. Williams has returned to practice and received his fair share of reps; however, Diaz said that until Williams is 100 percent, it’s Perry’s job. From the Miami Herald:

But after watching the last couple of days, we’ll still continue to start N’Kosi Perry at quarterback. We just feel like N’Kosi’s development, plus where Jarren still is and just getting back into the swing of things, N’Kosi gives us the best chance to win.

While he was shaky at times in relief of Williams against Virginia Tech, Perry put up big numbers against the Hokies, nearly leading Miami to a wild comeback win: 45 pass attempts, 422 passing yards and four touchdowns — all of which are career highs.

Miami hosts Georgia Tech this week — with a noon kickoff.

The Miami Hurricanes will be starting N’Kosi Perry against Georgia Tech.

At 1-2 in conference play, the Hurricanes are still in the mix to win the Coastal Division.

For your enjoyment, updated ACC/Coastal Division probability from @ESPNStatsInfo … UNC now slightly ahead of Virginia. Interesting Duke is ahead of Pitt despite H2H L. Oh, and GT is at 0 percent and therefore not listed. pic.twitter.com/bJ4oIaSazU

Miami sits at No. 9 in this week’s ACC Power Rankings