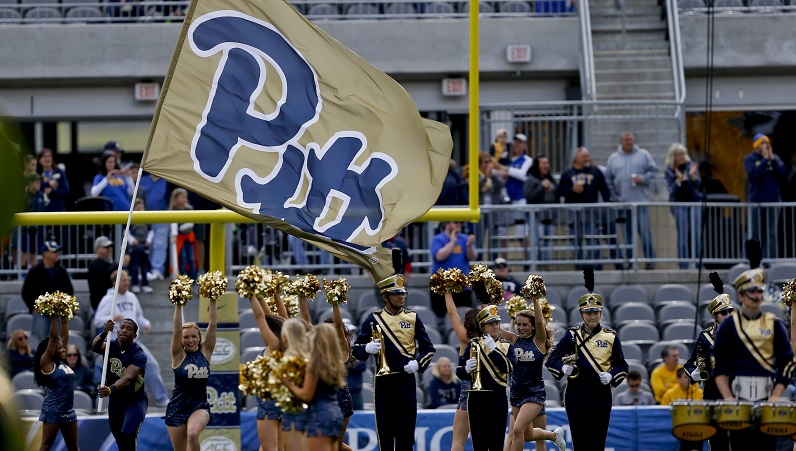 Pittsburgh cheerleaders run with a "Pitt" flag at the team introduction before an NCAA college football game against Rice, Saturday, Sept. 30, 2017, in Pittsburgh. (AP Photo/Keith Srakocic)

For the last few years, Boston College has been labeled as the ACC’s least-successful program in men’s basketball and football. When you go winless in both sports over an entire academic year, as BC did in 2015-16, that tends to happen.

But at the midseason point in football, and with the 2017-18 basketball season right around the corner, Pittsburgh is the school trending downwards.

On the gridiron, Pitt fell to 2-5 with a 35-17 home loss to NC State on Saturday. The Panthers are winless in ACC play. Their lone victories came in overtime over Youngstown State, as well as a win at home over Rice.

The Panthers’ remaining schedule is a five-game run through the ACC Coastal. Pitt still has to travel to Duke and Virginia Tech, and will host Virginia, UNC, and Miami. Virginia Tech and Miami seem like lost causes for the Panthers. Duke and Virginia are both fighting for bowl eligibility and need to beat Pitt to secure a 13th game. Only UNC, which faces as many if not more problems than Pitt, seems to be a contest that the Panthers could be favored in.

As the Panthers are trending downward in football, their two longtime Big East rivals, Boston College and Syracuse, are coming off stunning victories over Louisville and Clemson. In Pitt’s brief time in the ACC, the Eagles and Orange have been among the ACC’s worst programs. But through the midpoint of the 2017 season, Pitt is sharing that distinction along with North Carolina as the only two winless schools in league play.

If Boston College can show resurgence in basketball this winter and save Jim Christian’s job, Pitt could be set up to become the new punchline of the ACC in basketball as well. Pitt’s roster has turned over almost entirely. Four of the team’s top five scorers from last season (Michael Young, Jamel Artis, Sheldon Jeter, and Chris Jones), have graduated out. Six different players from the 2016-17 Panthers roster transferred, including Cameron Johnson to ACC rival North Carolina. The top returning player is Ryan Luther, who averaged 5.7 points a season ago.

Pitt did add a pair of experienced graduate transfers, Malik Ellison and Monty Boykins, a JUCO player, Jared Wilson-Frame, as well as a freshman transfer, Samson George. But the reality is Pitt is going to have a significant talent gap this coming season in relation to the majority of its ACC rivals. It wasn’t that long ago that Pitt was a perennial NCAA Tournament program under Jamie Dixon. Now, it will take one of Stallings’ best coaching efforts in his career to keep Pitt away from the bottom of the ACC standings.