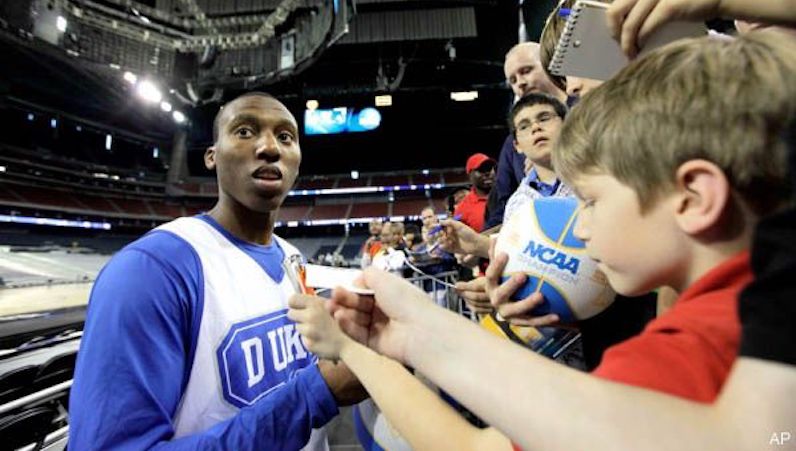 During his playing days, Nolan Smith helped guide Duke basketball to the 2010 NCAA Title. Now an assistant coach, Smith has emerged as a leader in the Durham community (AP Photo)

According to report from Matt Norlander of CBS Sports, Duke basketball is in the process of putting together a historical event.

Earlier this week, it was reported that the 2020 Battle 4 Atlantis tournament will be moved to South Dakota; the Blue Devils were supposed to be a part of that event’s eight-team field. However, Duke is now unlikely to play in that event. Instead, Duke is working to create a multi-team event (MTE) for the 2020-21 season — one that would take place at Duke and promote social justice and activism.

MORE: Sources tell @CBSSports that Duke, which is not expected to play in the South Dakota/Battle 4 Atlantis event, is in the process of trying to build a multi-team event this season to be held at Duke and would center around a theme and backdrop of social-justice activism.

Over the last few months, Duke has looked to take a leadership position in college athletics on promoting racial and social equality.

Back in June, a few weeks after the murder of George Floyd, amid a series of nationwide protests, Mike Krzyzewski took a stance. Duke published a succinct near-three-minute video from Coach K that had a clear message: “Black lives matter.”

It hasn’t been just Krzyzewski, though. Assistant coach Nolan Smith, a leader in the Durham community, has been deeply involved, too: joining the protest movement and sharing his stories and experiences in dealing with police.

One week after the protest, Duke basketball had the entire team register to vote ahead of the upcoming 2020 election.

As Norlander points out, this idea from Duke is in a planning phase; things are subject to change. That said, it’s a powerful idea from the Blue Devils — for a variety reasons.

As it works to grapple with the challenges of COVID-19, the 2020-21 college basketball season got its official start date earlier this week: Nov. 25. For now, the ACC still plans to have teams participate in some type of non-conference schedule.