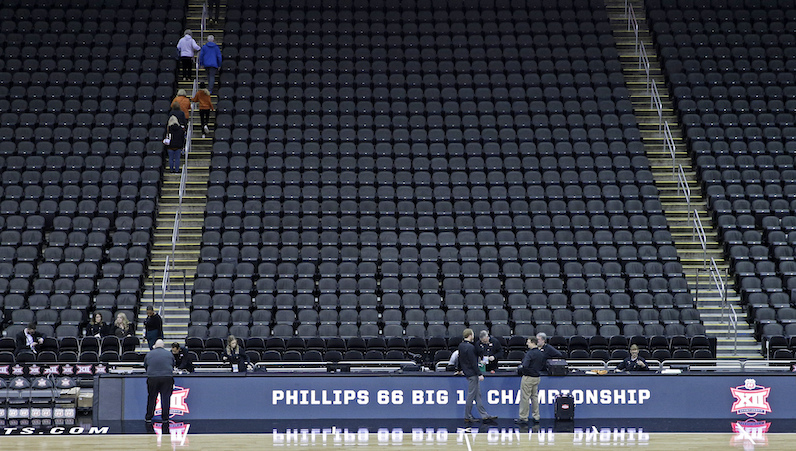 Fans leave the Sprint Center after the remaining games of the NCAA men's college basketball tournament were canceled due to concerns about the coronavirus Thursday, March 12, 2020, in Kansas City, Mo. (AP Photo/Charlie Riedel)

After months of meetings and discussions, the 2020-21 NCAA basketball season has its new start date: Nov. 25. This would be a slight delay from the initial Nov. 10 start date. Jeff Goodman of Stadium was the first to report the news.

Going back to March, when the 2020 NCAA Tournament was cancelled due to COVID-19, there’s been concern with regard for the upcoming season. A clunky, disjointed launch to the 2020 college football season may not have inspired much confidence, either. However, over the last month, the NCAA — and some of its key figures — have been vocal on concepts for how the season could take place.

Back on Aug. 17, Dan Gavitt, the NCAA Senior Vice President of Basketball, released a statement. At the time, Gavitt made clear that in the coming weeks, the Men’s and Women’s Basketball Oversight Committees would lead the process for developing recommendations to be considered by the NCAA Division I Council, which met today.

Two weeks later, CBS Sports got its hands on four different start dates/timelines that NCAA would consider. (These dates were similar to ones mentioned by Wake Forest coach Steve Forbes during a radio interview with WSJS.)

Season on the horizon

When the season was set to start Nov. 10, teams would be allowed to start full practices Sept. 29. With the Nov. 25 date, full practices will start Oct. 14. Starting Sept. 21, though, teams will be allowed up to eight hours per week for on-court workouts.

With regards to team schedules, programs can play a maximum of 27 games — a four-game reduction. Teams must also play a minimum of 13 games.

There still exists the possibility, too, that the ACC could even expand the number of conference games — just for this season.

Elsewhere around the college basketball landscape, there’s been movement with some of the major early-season tournaments to find more controlled bubble-like environments to play host. The 2020 Battle 4 Atlantis, which features Duke, will reportedly take place in South Dakota now.

North Carolina is set to participate in the 2020 Maui Invitational, which could be moved to Asheville (NC) or Indianapolis. The Maui was set to run Nov. 23-25 this year; that would need to be adjusted, however, for this new launch date.

Orlando, which has been home to the NBA’s successful bubble, may turn into a host site for several other non-conference tournaments.

Sources: Orlando will host the following eight early season events during the first few weeks of the college basketball season.

How these events fit into the picture for each individual conference remains to be seen; however, there’s certainly a great deal of interest to see that the 2021 NCAA Basketball Tournaments take place.