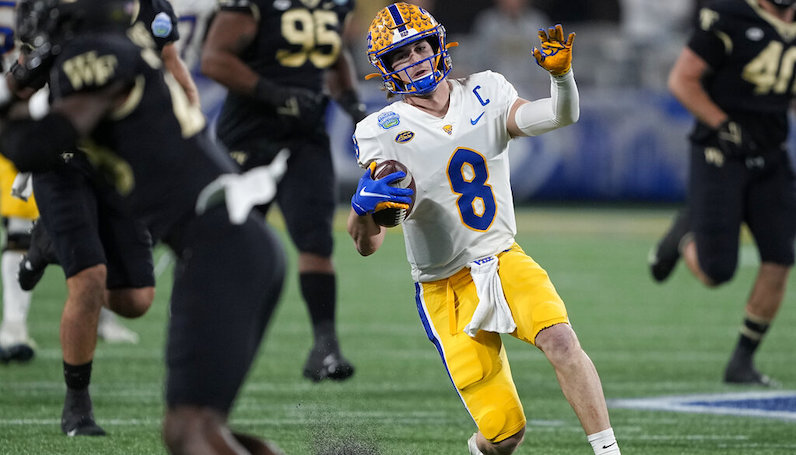 With a victory in the 2021 ACC Championship game, Pitt football continues its special 2021 season. The Coastal Division champs (11-2) defeated the Wake Forest Demon Deacons in Charlotte, 45-21. In doing so, Pitt captured its first ACC title in program history.

Pittsburgh becomes the first program other than Clemson to win an ACC football championship since Florida State in 2014.

Initially, the matchup between Pitt and Wake Forest started off with fireworks. The first quarter ended with 35 points combined, for two of the top FBS scoring offenses. By the 8:07 mark of the second quarter, Pitt tied the game at 21-21; quarterback Kenny Pickett connected with Jared Wade on a 4-yard touchdown reception.

However, after this scoring outburst, both offenses fell into the mud. During the middle of the game, neither team could find the end zone. In fact, Wake Forest never scored again after the first quarter.

It was Pickett’s tonight, though. Pickett, the 2021 ACC Player of the Year, broke two records in the first half. First, Pickett erased Dan Marino’s program record of 79 career TD passes.

Kenny Pickett’s 80th career TD pass moves him past Dan Marino for most in Pitt history.

What’s crazy is 39 came in his first 3 seasons combined and 41 in this season alone.

Next, the touchdown toss from Pickett to Wade also broke the single-season record of touchdown passes for an ACC quarterback. (Clemson’s Deshaun Watson set the previous record in 2016 with 41.)

Pickett open the game’s scoring with a play that won’t be forgotten anytime soon. Less than 90 seconds in, Pickett scrambled out of the pocket on a 3-and-5. As Pickett moved up the field, he used a fake slide maneuver, which frozen multiple defenders, and opened the door for a 58-yard touchdown run.

KENNY PICKETT FAKED THE SLIDE AND TOOK IT 58 YARDS TO THE HOUSE!!!! pic.twitter.com/cEnk1dFqKR

Read More on Pitt Football and The ACC