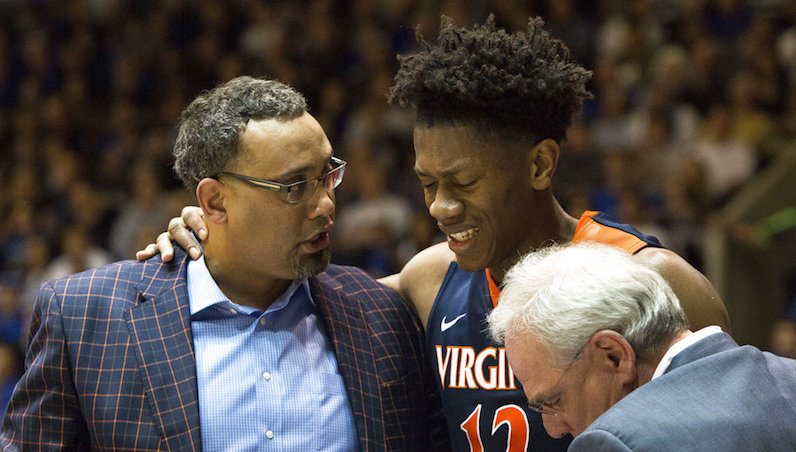 It’s becoming difficult to overstate what redshirt freshman De’Andre Hunter has done for Virginia this season, particularly during conference play.

Saturday at Duke, with senior Isaiah Wilkins struggling on offense and with foul trouble, Hunter slid into the power forward spot and thrived. Suddenly, the Cavaliers look even more capable of turning this outstanding regular season into a deep NCAA Tournament run.

Hunter has spent a lot of the season playing on the perimeter, but at 6-foot-7 with a 7-foot wingspan, it was only natural Virginia coach Tony Bennett turned to Hunter against the Blue Devils ultra-athletic big men.

One Saturday in Cameron…

And it worked extremely well, giving UVA a scoring option in what has often been an offensively challenged front court. While Duke was erasing a 13-point Cavaliers lead early in the second half, the Blue Devils were simply daring Wilkins to shoot from the elbow and the senior was just off.

But as Wilkins went to the bench, Hunter moved to the high post against the Duke zone and quickly got the Virginia offense back on track. Hunter had success knocking down shots from 15-feet and in, and was able to face up in the paint against the Devils’ freshman tandem of Marvin Bagley and Wendell Carter.

Hunter finished with 12 points, and his offense kept Virginia in the game after Duke had taken the lead, but perhaps even more surprising was that Hunter was also UVA’s best post defender.

It might seem strange to say after a game in which Bagley had 30 points and 15 rebounds, but Hunter really slowed the presumptive ACC Player of the Year down for stretches in the second half.  It’s not coincidence that after Hunter left the game with an ankle sprain, Bagley scored nine points in the final 4:09 and almost single handedly kept the Cavs from running away with it.

No wonder there were a lot of nervous people when Hunter stayed on the ground after scoring late in the game. His versatility has not only made him one of the biggest keys to Virginia making a Final Four run, he has quickly become the Cavaliers’ best NBA prospect.

Looking down the barrel

There were moments Saturday afternoon with Hunter and Bagley going one-on-one that just had the feeling of two pros competing.

Hunter was diagnosed with a high ankle sprain, but early indications suggest he shouldn’t miss any games with the injury.

Virginia fans will hope he is quickly back to 100 percent, because Hunter’s ability to contribute inside and out is quickly becoming one of the Cavs’ most dangerous weapons.

Despite the departures of Shayok, Thompson: UVA basketball hit another level in 2018