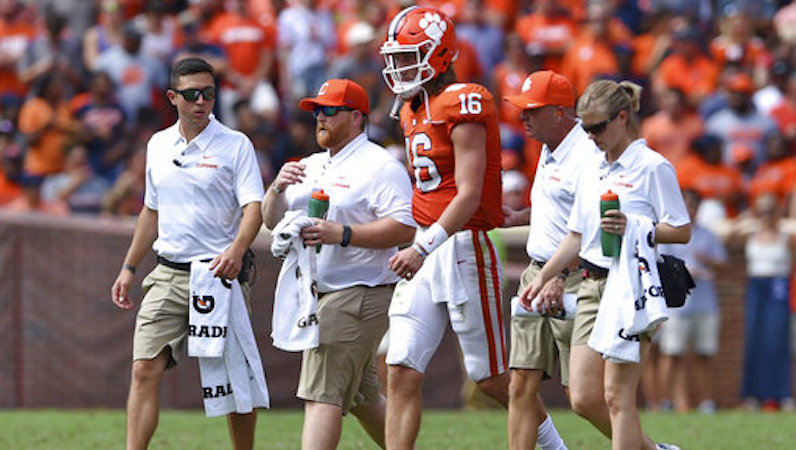 Clemson quarterback Trevor Lawrence leaves the field after being injured during the first half of an NCAA college football game against Syracuse, Saturday, Sept. 29, 2018, in Clemson, S.C. (AP Photo/Richard Shiro)

Clemson offensive coordinator Jeff Scott says Clemson’s training staff believes Trevor Lawrence sustained a neck injury against Syracuse. This mirrors what Dabo Swinney said on Sunday, too. According to Scott, Lawrence could practice on Monday for the Tigers.

Jeff Scott says there's a chance Trevor Lawrence could practice tonight. Still in concussion protocol, but sounds like it was more of a neck strain than anything, per med staff.

Before halftime on Saturday, Lawrence was knocked out of the game while trying to scramble for extra yards. Only a few days after Kelly Bryant’s decision to transfer, Chase Brice, previously the third-string quarterback, had to play in relief.

Behind the stellar running of star back Travis Etienne, Clemson pulled off the comeback and held on to its top-five status.

Clemson gets back on the field for game action in only a few days; this Saturday the Tigers travel north for a matchup with Wake Forest. The status of Trevor Lawrence for that game remains up in the air. If Clemson must, this team has the defense, running game and skill talent to still power through the ACC.

UPDATE: practice on MondayAfter going through the concussion protocol, Trevor Lawrence went on to take every snap at for Clemson.