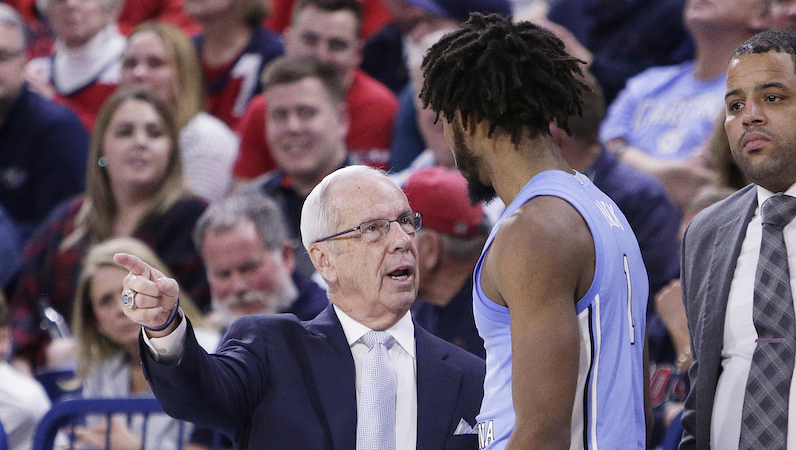 Harrison Ingram, one of the top players in the 2021 recruiting class, will announce his college decision Friday, Sept. 18. Ingram, a 5-star forward out of Dallas, is one of North Carolina’s highest-ranked targets for that cycle. The 6-foot-6 Texan is a top-15 overall prospect.

When Ingram announced his top six earlier this summer, UNC made the cut; the other five programs consist of Michigan, Howard, Stanford Harvard and Purdue.

Stanford may be the team to beat, but currently Ingram’s decision appears open. Ingram will make his selection at 5 p.m. EST.

During the 2020 recruiting cycle, Haase beat out his old mentor to land 5-star wing Ziaire Williams, a prolific shooting prospect.

The Tar Heels already have one 2021 commitment: in-state forward Dontrez Styles. Back in April, the 6-foot-6 Kinston native committed to UNC over NC State, Clemson, Maryland and Pittsburgh.

Elsewhere in the class, North Carolina seems to have fallen out of the running for 5-star 2021 center Chet Holmgren. (Gonzaga and Minnesota will compete for the 7-footer.)

Over at Duke, the Blue Devils are in the midst of a superb 2021 class. Duke already has commitments from two top five players: 5-star forwards AJ Griffin and Paolo Banchero.

The Blue Devils are also in the running for 5-star Patrick Baldwin Jr., a 6-foot-9 power forward with plenty of NBA potential. Recruiting experts at both Rivals and 247 Sports peg Duke as the favorite to land PBJ, too.

Duke is also in the top three for 5-star shooting guard Trevor Keels — along with UVA and Villanova.