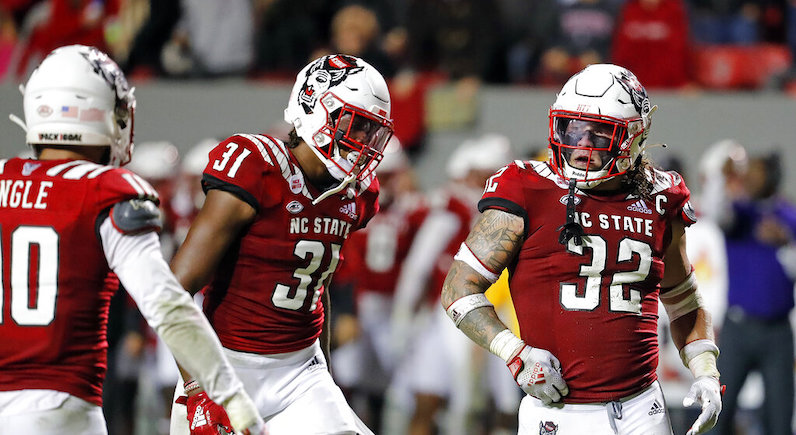 North Carolina State's Drake Thomas (32) celebrates his sack with teammates Vi Jones (31) and Tanner Ingle (10) during the second half of an NCAA college football game against Louisville in Raleigh, N.C., Saturday, Oct. 30, 2021. (AP Photo/Karl B DeBlaker)

While the NC State Wolfpack have plenty of talent set to return on defense in 2022, Dave Doeren’s club with be without linebacker Vi Jones.

Jones, one of the fastest linebackers in the ACC, announced that after three seasons with NC State, he’ll enter the 2022 NFL Draft.

Dear WPN,
After an unbelievable 3 years, I am signing off. It has been a such an incredible journey that I will remember for the rest of my life, and I’m truly blessed to have been able to share it with you guys. #GoPack ❤️🤍🐺🐺🐺🤍❤️
(My farewell to WPN)https://t.co/0XhhAMm5rz

Jones competed in the Hula Bowl on Saturday (Jan. 15), which functioned as a draft showcase event.

Back in Jan. 2019, NC State added Jones as a transfer from Southern Cal; previously a 4-star recruit in 2017 class, Jones shifted coasts and landed in Raleigh. Jones was an important scout team player for the program in 2019, too.

During the 2020 season, Jones appeared in all 12 games for NC State, including four starts. He flashed impressive sideline-to-sideline speed, while collecting 35 tackles and three sacks, tied for third-most on the roster.

Once again, Jones was a crucial element in the middle of NC State’s defense in 2021. With injuries to two All-ACC linebackers — Payton Wilson and Isaiah Moore — Jones stepped up, holding down the linebacker position with Drake Thomas.

Jones made five started and led the Pack with six sacks; he also finished fourth on the roster with 45 total tackles. Thomas led the way with 99 tackles.

Wilson, Moore and Thomas make for a monster trio in the middle of what should be an excellent defense for NC State next season. However, it’ll be tough to replace Jones’ speed, which was a wickedly important aspect of NC State’s defense 2020-21.

Why the return of kicker Chris Dunn matters for the Wolfpack