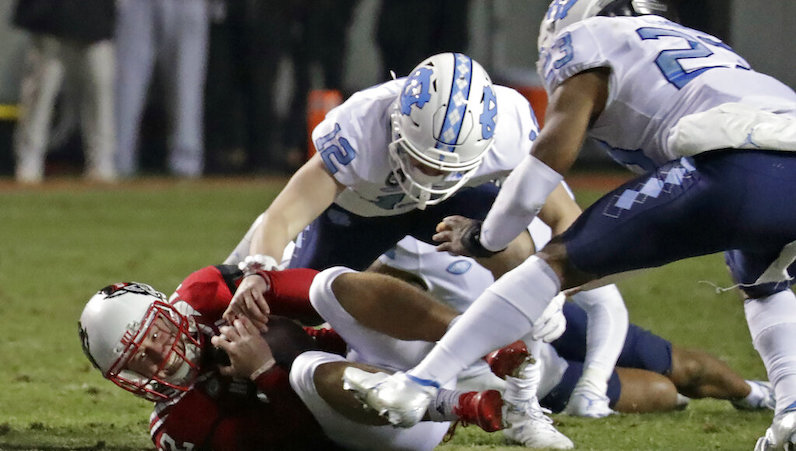 Earlier in the offseason, NC State lost two key special teams peformers to the NFL: punter Trenton Gill and kick returner/running back Bam Knight, both of whom were named First Team All-ACC in 2021. According to a report from David Thompson of the Fayetteville Observer, though, the Wolfpack will bring back kicker Chris Dunn for his fifth season in 2022.

Dunn, who has been NC State’s place kicker since his true freshman season in 2018, is the school’s all-time leader in points (377) and made field goals.

NEWS: NC State kicker Chris Dunn will return for his fifth season with the Wolfpack. https://t.co/iNc06Om0dC

During the 2021 season, Dunn usurped former kicker Niklas Sade as the program’s top scorer. He’ll live on in NC State glory, too, for his recovery on an onside kick, which helped propel a comeback victory over North Carolina in Raleigh.

Sade left the program after the 2014 season. In the three following years, NC State’s kick game struggled, which proved costly. Over the next three seasons, the Wolfpack went 5-8 in one-possession games. Plenty of kickers got cracks at the job; however, Kyle Bambard was likely the most notable face.

When the much-heralded Dunn arrived on campus in 2018 — two years after he committed to the program — he stepped into the place kicker role. Bambard moved over to kickoff dutiess

It’s important for a team like NC State, which will enter 2022 with big expectations, to be able to win on the margins. It’s impossible to say at this juncture, but the specialness of the 2022 season could game down to how the Wolfpack handle close games.
There’s a lot of luck involved with football. This is why a quality kicking game is so crucial. Kickers can swing the balance in one-possession games. There’s a fine line between what’s deemed successful or a failure in football, which is wild given how randomness exists within each individual event. If you want the odds shifted in your favor, make sure you have a good kicker.