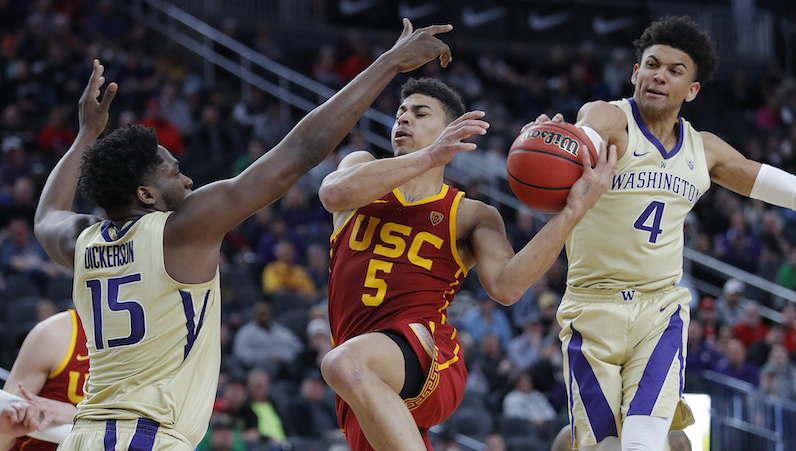 Washington's Matisse Thybulle (4) steals the ball from Southern California's Derryck Thornton, center, beside teammate Noah Dickerson (15) during the second half of an NCAA college basketball game in the quarterfinal round of the Pac-12 men's tournament Thursday, March 14, 2019, in Las Vegas. (AP Photo/John Locher)

A former 5-star recruit, Thornton arrives in Chestnut Hill after three years at Southern Cal. ACC fans, however, will likely recognize his time from his one season at Duke (2015-16). That one-year run in Durham, while teamed up with future NBA players Brandon Ingram and Grayson Allen, didn’t go so great, though.

Thornton visited Boston College about four weeks ago — in the middle of May.

During two seasons with USC, Thornton played in 57 games (28 starts), but struggled with his shot (41.4 eFG%) and battled turnovers (3.2 per 40 minutes). In the 2018-19 season, Thornton scored just 0.58 points per possession out of the pick-and-roll (30.3 FG%, 31.5 eFG%), according to Synergy Sports. For the Eagles, Thornton must cutdown on his turnovers and find ways to connect on more jump shots.

With the departure of Ky Bowman to the 2019 NBA Draft, Thornton will team up in the BC backcourt next to promising sophomore guard Wynston Tabbs.

With the addition of 4-star in-state running back Michael Allen, NC State football now has…