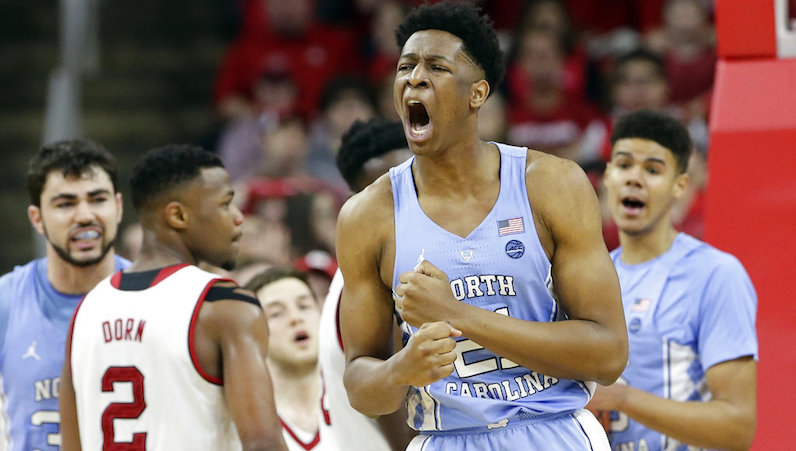 North Carolina's Sterling Manley reacts following his basket and a foul against North Carolina State during the first half of an NCAA college basketball game in Raleigh, N.C., Saturday, Feb. 10, 2018. (AP Photo/Gerry Broome)

North Carolina has found something that works. Winners of five straight games, including three victories of 17-plus points, the Tar Heels are blitzing the league with a small-ball lineup that can spread the floor and cause chaos.

This wasn’t an accident; it’s also not a surprise. UNC is simply putting its five best players on the court, and it’s really hard to defend the three-point line when multiple catch-and-shoot threats dot the arc.

Roy Williams has his starting five, and his crunch-time five. In the minutes between, though, it will be up to his bench to find ways to augment what the starters bring to the table.

In the case of Sterling Manley, it’s simple: When called upon, rebound your position (23.6 percent defensive rebound rate), avoid mistakes (turnovers, missed free throws) and influence the game at the rim — on both ends. Manley plays under 10 minutes per game in ACC action, but he’s making a serious impact.

According to Synergy, on non-post-up attempts at the basket, Manley has shot 64.9 percent and scored 1.41 points per possession; that ranks 10th in the ACC amongst players with at least 50 possessions — just behind Wendell Carter (1.48) and Bonzie Colson (1.45).

Manley has drawn a shooting foul on 12.3 percent of these possessions, per Synergy, which is the fourth-highest rate in the league. According to KenPom, Manley draws a team-leading 6.7 fouls per 40 minutes. The freshman forward is solid from the stripe, too; in ACC play, Manley is 24-of-29 on free throw attempts.

North Carolina ranks No. 63 nationally, and No. 5 in the ACC, in efficiency on put-back attempts after an offensive rebound: 1.2 points per possession, 61.1 FG%. Maye accounts for 30 percent of UNC’s put-back possessions, and has scored a team-best 76 points on said possession type. However, Manley has been slightly more efficient: 1.33 points per possession (No. 10 in the ACC), 69.2 FG%, per Synergy.

Make it a challenge

According to Sports Reference, Manley blocks 3.8 shots per 100 possessions; in ACC play, though, that’s jumped to 4.9.

On post-up possessions defended by Manley, opponents have scored just 0.68 points per possession on 37.5 percent shooting, according to Synergy. That, too, ranks inside the top 10 of the ACC.

After this weekend’s win at Louisville, Cardinals wing Dwayne Sutton knows just how much of an impact Manley can have.

Hey, check out that alliteration!

The ACC Tournament is two weeks away; beyond that, the NCAA Tournament, and a shot at at third-straight Final Four appearance, looms. A lot of stuff goes into postseason runs in March; however, it’s critical to be able to adjust to match-ups. Prep time between games vanishes, which can be a strain when forced to defend and attack multiple teams with multiples styles of play and personnel groups.

Rotations may tighten, but role players, like Manley, are tasked with doing exactly what their nomenclature states — play a role.

Now, North Carolina can be in the proverbial driver seat for a lot of this. The Heels are experienced, skilled and play a style of ball that will force most other teams to adjust.

In the NBA, Mike D’Antoni of the Houston Rockets has preferred to play small-ball on offense for over a decade now. It’s served him well, too — five seasons of 50-plus wins (soon to be six), two Coach of the Year awards and a handful of No. 1 offenses. A revolutionary, his belief has always been that his teams put more strain on opposing defenses by staying small and chucking three-pointers — it forces opponents to change how they want to play, not his.

Roy Williams can take a similar approach with his best lineup; that first five is ironclad, and it could be a nightmare for opponents this postseason. However, there may come a time when UNC needs Manley to spell Maye, or play alongside him, in leverage minutes. In this capacity, Manley has a lot to offer UNC.

Cameron Johnson: “Urgency” is key for remainder of season