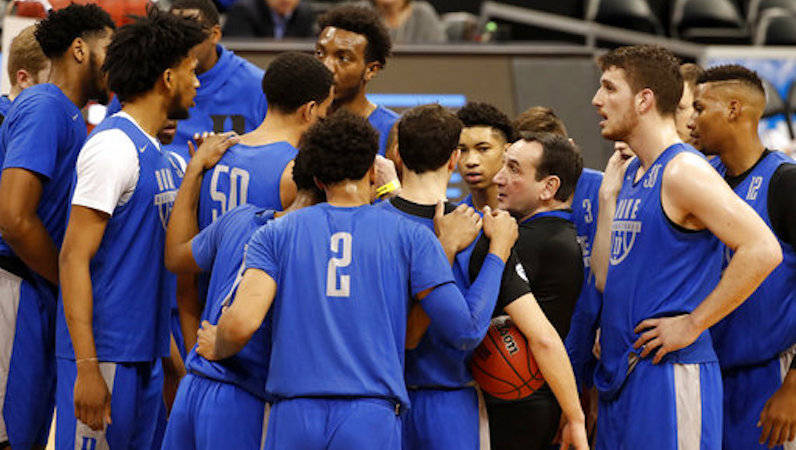 With Duke basketball in the midst of its preseason trip north to Canada, it’s more than an interesting footnote to see how these game will be broadcast. All three of Duke’s games will be broadcast exclusively on ESPN+.

These are the baby phases for ESPN+, ESPN’s new streaming which launched just four months ago — back in April — and costs $5 per month. It’s also where portions of the national audience got their first look at freshman phenom Zion Williamson on Wednesday night in Duke’s win over Ryerson.

It’s more than just that, though; the school announced last month that basketball team will also be the subject on an eight-episode mini series that will chronicle the program’s build up to the 2018-19 season. That program will air on ESPN+, too.

Back in the early 1990s, as it was en route to becoming the biggest sports media conglomerate in the history of the world, ESPN launched ESPN2 as an offshoot in the fall of 1993. The new channel was designed, initially, to help capture a younger audience.

Another way to drum up interest and demand for the new channel: premier live sports. One of the biggest games on the menu in college sports — year after year — is Duke-UNC basketball. The rivalry alone is historic and great, but it certainly doesn’t hurt when both teams are Final Four contenders, too.

Oh, and let’s not forget: Duke and UNC had combined to win the previous three national championships.

So: with Brad Nessler and Dick Vitale in the house, ESPN2 — four months into its existence — broadcast the Feb. 1994 matchup of No. 1 Duke against No. 2 North Carolina.

Despite 20 points from Grant Hill, who would later be named the ACC Player of the Year in 1994, Duke fell to North Carolina, 89-78. The Tar Heels were led by 16 points and eight rebounds from Eric Montross. When the two teams rematched four weeks later in Durham, it was back, nationally, on ESPN proper.

Nearly 25 years later, ESPN2 is still here, and ESPN — now backed with Disney’s dollars — is the unquestioned leader in sports programming and content.

With ESPN+ trotting out, time truly is a flat circle: ESPN will once again utilize Duke basketball to drum up interest and drive some demand. It certainly doesn’t hurt, either, that Duke has a loaded team with mostly unseen freshmen. Even with Tre Jones and Cameron Reddish sidelined, there’s still demand to watch Zion Williamson and RJ Barrett.

(I signed up for the streaming service specifically to watch these games, and I assume plenty of folks in the basketball universe did, too.)

Duke basketball has also been featured 16 times on ESPN’s popular College GameDay program — the third most, behind UNC (20) and Kansas (19). Of those 16 featured appearances, Duke has been the host for seven of them — the second most times hosting the event. (Kansas, 8)

Everyone hates Duke but: The brand is strong

Last December, I did a quick look at each individual Twitter account for every ACC basketball program. At the time, Duke (@DukeMBB) possessed the league’s second most active account — in terms of volume of tweets — and the biggest following. The account had over 2.2 million followers, which dwarfed every other program in the league. UNC basketball’s Twitter account was No. 2: 901,068. That’s an enormous gap.

Currently, Duke basketball’s account is still the only official ACC basketball program handle with over a million followers, although North Carolina is closing in on the benchmark quickly. Duke now has over 2.23 million followers on Twitter.

Of course, Twitter followers only mean so much, especially when it comes to monetizing a product. Social media is an excellent way to craft and promote a brand or message; however, the needles must be moved elsewhere, too. Duke does just that.

For years and years, Duke basketball has been a monster draw on television. To the surprise of literally no one ever, when Duke and UNC face one another in basketball, it’s a ratings monster. This is what can happen when there’s a national/global fan base.

In fact, during Duke’s win over Ryerson this week, Dan Shulman and Jay Bilas talked about parts of this on the ESPN+ broadcast. The sheer volume of Duke paraphernalia jumped out to Bilas. According to Shulman, though: that’s par for the course. Now, that’s more anecdotal, but it’s clear: Duke basketball draws eyeballs to the TV screen.

The long-awaited launch date of the ACC Network is rapidly approaching. Partnered up with ESPN, it’s set to start in August 2019, and the success of the venture could be critical to the ACC, which trails other Power Five leagues in per-school revenue. Conservative financial estimates are encouraging, but with all the challenges broadcast television presents now and going forward, it’s important that this go well for the ACC.

To help ensure that, the league will take several steps. As commissioner John Swofford announced at football media days: the ACC will have several conference football games set to start the 2019 season. That’s quality inventory for the league to kick out, right from the start.

The league is also toying around with the idea of having conference basketball games — spread over several days — to start the 2019-20 basketball season. Do the quick math, and this would occur in the network’s fourth month of operation.

Regardless of how things are staggered, you can bet the power and reach of Duke basketball will be critical, from a content perspective, too. It’s easy to envision a world where Duke is a part of that hypothetical early-season conference matchup package; or perhaps the ACC Networks is the broadcast source for a notable ACC game of the Blue Devils.