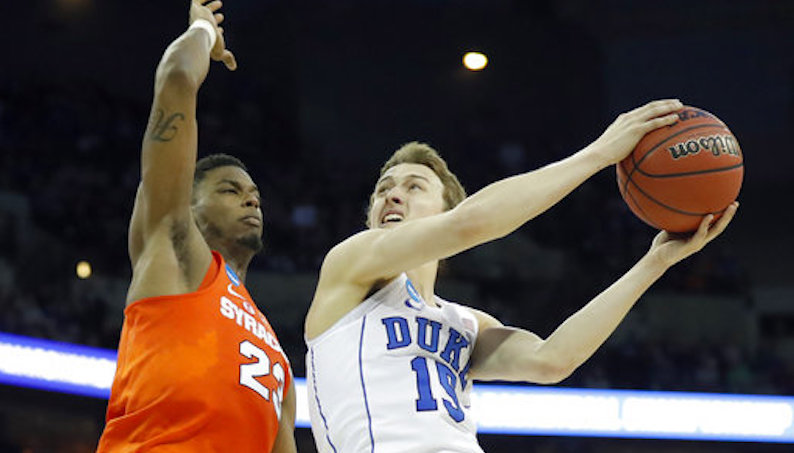 Well, this is unfortunate. After suffering an orbital fracture in Duke’s exhibition win over Ryerson, sophomore wing Alex O’Connell will miss the remainder of the team’s trip in Canada. The school announced the news on Thursday; fortunately, though, O’Connell is expected to make a full recovery.

NEWS: Sophomore guard Alex O’Connell suffered an orbital floor fracture during last night’s game. He will miss the remainder of the #DukeCanadaTour, but is expected to make a full and routine recovery. pic.twitter.com/ILZjW3FJFQ

O’Connell started the game, but his time on the floor was incredibly short lived. A little over three minutes into the game, O’Connell tried to defend a dunk attempt from 7-foot-2 Tanor Ngom, and got caught in the face with an inadvertent elbow.

He was taken to the hospital after the injury occurred. Prior to that, O’Connell grabbed two rebounds. He didn’t attempt a shot from the floor.

Alex O'Connell is in the hospital being evaluated after taking an elbow to his eye, according to Coach K.

A fringe rotation player last season, Alex O’Connell is one of the few returning players on Duke’s 2018-19 roster. After having a nice impact in limited minutes in 2017-18, AOC could be an important player for Duke this year.

O’Connell is a good long rebounder (5.4 rebounds per 40 minutes) for a wing, and he provides some shooting, which could be critical for an offense that needs spacing. This roster needs a low-usage wing that can hit three-pointers; it’s why O’Connell and Jack White could have serious value next to RJ Barrett, Zion Williamson, Cameron Reddish and Tre Jones.

As a freshman, he scored 120 points on just 88 field goal attempts — a true shooting rate of 61.8 percent, which is great — and connected on 22-of-45 three-point attempts (48.9 3P%). According to Synergy Sports: O’Connell — on a small sample size — scored 1.5 points per possession (75 eFG%) on catch-and-shoot attempts last season. Those are both excellent numbers.

Next on the schedule

Duke has two more games remaining on its trip north of the border:

After that, the Blue Devils open the 2018-19 season, officially, on Nov. 6 against Kentucky. Before that, Duke has two more exhibition games in Durham, both in late-October.

All aboard the hype train: Zion Williams shines in Duke debut