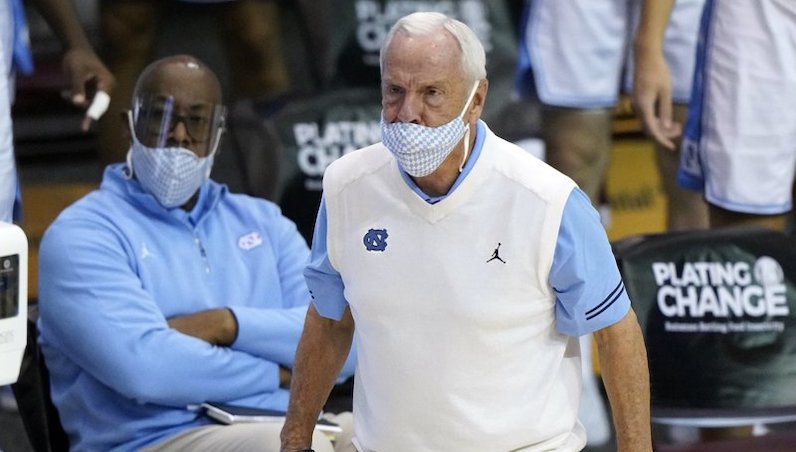 In this Dec. 2, 2020, file photo, UNC basketball coach Roy Williams directs his team in the second half of an NCAA college basketball game for the championship of the Maui Invitational in Asheville, N.C. Williams' Tar Heels visit rival Duke on Saturday, Feb. 6, 2021, with it marking the first meeting with both teams unranked since 1960. (AP Photo/Kathy Kmonicek, File)

The news of Walker Kessler entering the transfer portal may have shook the ACC basketball universe; however, this could be just the start of a busy few months for UNC basketball.

An unprecedented offseason for college basketball is about to mix with the uneven nature of North Carolina’s 2020-21 season. So far, early indication seem to forecast a shifting horizon for Roy Williams and the Tar Heels.

This started immediately after UNC lost to Wisconsin last Friday in the NCAA Tournament. Following the game, senior forward/center Garrison Brooks floated the possibility of playing at another program next season.

Garrison just floated “going somewhere else” as a possible option for next year.

Currently, Brooks has a lot of options. He could return to UNC for his “super senior” season, due to the COVID-19 eligibility rules put in place by the NCAA. Brooks could transfer to another program. Or he could go pro.

(Brooks isn’t an NBA prospect, but he’s a solid player. With proper scouting, he could turn up on a good team in Europe.)

Once the news of Kessler went public, several parents of UNC basketball players took to Twitter, while offering up a handful of cryptic tweets. This started with point guard Caleb Love’s father.

Not long after those tweets went up, Armando Bacot’s father added his own thoughts: “CHANGE IS EVERYTHING.”

On the surface, these tweets mean very little. However, in conjunction with Kessler’s decision, there seems to be more here. That notion is certainly supported by what Quierra Luck is reporting. According to Luck, there’s more to come.

My sources are telling me there is more news to come.

One more thing about me, I won't ruin a kid's story. Ill never identify who because it's their story to tell on their terms. Thats why I tweet in general. I understand it being frustrating but I want to give them that space.