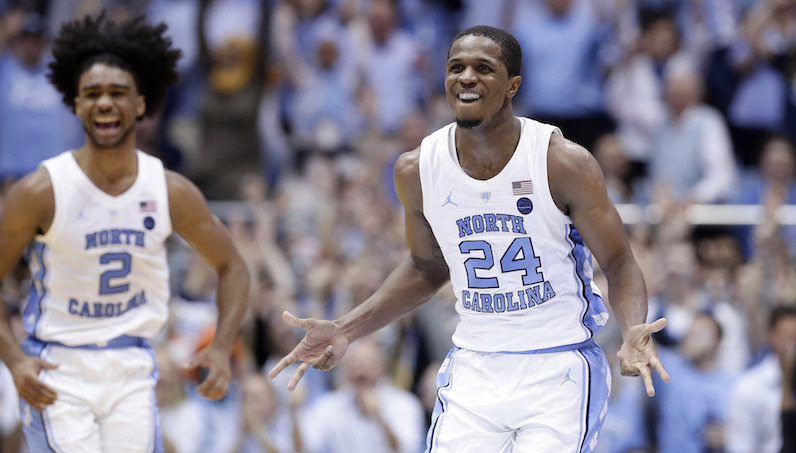 The 2019 ACC Men’s Basketball Tournament gets started this week in Charlotte. Before that revs up, here’s the ACC Power Rankings at the end of the regular season.

As Jay Huff continues to work himself more and more into Tony Bennett’s rotation — 16.2 minutes per game over the last five games — it’s been interesting to see his shot profile develop, too. Huff brings a Moneyball approach to Virginia’s half-court offense: dunks and 3-pointers.

North Carolina is in the midst of another wonderful offensive season. This is one of the best 3-point shooting teams Roy Williams has ever coached. Currently, 36 percent of the team’s field goal attempts have come from beyond the arc, which would be the highest 3-point attempt rate of a UNC team since 2002-03, the final year of Matt Doherty.

With Coby White and Cameron Johnson bombing away, the Heels have connected on 37.3 percent of those 3-point attempts, too.

Carolina only had 5 live-ball turnovers against Duke, 4 of which led to fast breaks. Those transition opportunities only led to 2 Duke points. UNC's defense was great in the win, but it was helped by how the Heels protected the ball offensively.

North Carolina’s offense has also assisted on 62.1 percent of its field goals, too, which is good for fifth in the nation.

When healthy this season, Duke was able to switch 1-5 with confidence. Marques Bolden showcased serious improvement as he switched out on smaller perimeter-based opponents; with Zion Williamson, Tre Jones and Cam Reddish, Duke also had three high-level defensive prospects flying around, too.

As a result, Duke limited opponent 3-point attempts. This season, 34.5 percent of the field goal attempts Duke defended came from beyond the arc, which ranks 47th nationally, per KenPom. (Within the ACC, only NC State’s defense produced a lower rate: 33.5 percent. This is a point of emphasis for Kevin Keatts: run opponents off that line.)

Last season in the zone, nearly 37 percent of opponent field goal attempts against Duke came from beyond the arc. However, this year’s number is still well above where Duke has been for the last decade or so. For instance, in the 2011-12 season, opponents posted a 3-point attempt rate of just 24.1 percent, which ranked No. 3 nationally.

Another quick note on Duke’s defense: with Jones, Reddish and Williamson, the Blue Devils were absolute demons at turning opponents over. For big chunks of the season, Duke ranked No. 1 nationally in steal rate.

Over the last six games without Zion, though, Duke has averaged 5.3 steals; in four of those contests, Duke’s recorded five or fewer steals — steal rates under seven percent in each of those games.

In the first 25 games of the season with Zion healthy, Duke averaged 10.5 steals per game and on only once occasion (Gonzaga) posted a steal rate below seven percent.

In the regular season finale  — a win at Wake Forest — Florida State blocked six shots (13.6 percent block rate). Three of those blocks were from Christ Koumadje, and the other three were provided by super-sub Mfiondu Kabengele. For the season, both of those guys averaged over 2.5 blocks per 40 minutes, too.

This year in the ACC, there were 13 players who recorded at least 200 minutes of action and posted individual block rates above seven percent. Of that group, eight were teammates:

Something to watch for as Chris Mack’s time at Louisville continues to evolve: 3-point attempt rate. This season, over 43 percent of Louisville’s field goal attempts have been 3-pointers (43.3 percent, No. 64). All nine of Louisville’s rotation players average over one 3-point attempt per game; that includes centers Steven Enoch and Malik Williams, who have combined to go 38-of-114 (33.3 3P%) from deep.

Going back to his time at Xavier, though, on only one occasion (2017-18) did Mack have a team with a 3-point attempt rate above 36 percent. Is this the wave of the future? Or is this Mack playing a style best fit for his current set of personnel?

Dealing without All-ACC point guard Justin Robinson forced Virginia Tech to rework its offense on the fly; Nickeil Alexander-Walker became the team’s primary pick-and-roll creator, while also functioning as a post-up hub, too.

Alexander-Walker’s 3-point shot has slumped in ACC play — down to 34.1 percent. It’s more of a challenge to get to those juicy catch-and-shoot looks without the slicing drive game of Robinson. However, when he’s able to shoot off the catch, and without all kinds of defensive attention, NAW has still been darn good.

According to Synergy Sports, Alexander-Walker has scored 1.33 points per possession (66.3 eFG%) on no-dribble jump shots from spot-up possessions this season.

If Syracuse is going to make another postseason run (you know they will), it may be important for the Orange to rediscover the offense it displayed at UNC (60 eFG%) and Wake Forest (57.9 eFG%). In both of those road games, Syracuse scored over 1.1 points per possession.

To close down the regular season, Syracuse went against two very good defenses and, predictably, struggled. Syracuse turned the ball over (26.6 percent turnover rate at Clemson) and got really bricky shooting it, too: sub-44 percent effective shooting in both games.

This has been the story of the season; when Syracuse’s offense can produce point, the Orange can run with basically anyone. If not, well, it can get sluggish.

During ACC play, NC State rebounded 34.9 percent of its misses, which ranked tops in the league.

DJ Funderburk, an exceptionally good leaper in the frontcourt, wastes no time turning these opportunities into points, too. According to Synergy, Funderburk (27 dunks) has scored 1.32 points per possession (64.3 FG%) on put-back attempts this season.

This week’s matchup with NC State at the ACC Tournament is critical for Clemson. A win would give the Tigers 20 victories on the season — for the fourth time under Brad Brownell — and possibly clinch an NCAA Tournament slot. Currently, Bracket Matrix has Clemson in as a 12-seed.

KenPom and Bart Torvik currently like Clemson as a slight favorite over NC State. Regardless, the Tigers will likely need a monster game from veteran guard Marcquise Reed, who led the ACC this season in isolation efficiency: 1.15 points per possession (56.6 eFG%)

Unfortunately, there likely isn’t much time left in Miami’s season — which, sadly, never got off the ground. With that in mind, let’s take one more second to appreciate the handiwork of Chris Lykes in 2018-19.

According to Synergy Sports, Lykes got a lot of his offense from the pick-and-roll, which is Miami’s bread-and-butter: 0.91 points per possession (52.8 eFG%).

The departures of Josh Okogie and Ben Lammers made things tough this season for Jose Alvarado, who saw his 3-point shooting (29.1 3P%) and offensive rating (99) dip. However, he still pushed through and had a productive season for the Yellow Jackets.

Alvarado is the only player in the ACC this season to play at least 1,000 minutes with a usage rate of 20 percent, assist rate of 20 percent and a steal rate of three percent. He did all of this while also lowering his turnover rate, too: 15 percent in ACC play (2.1 turnovers per 40 minutes).

As Bonzie Colson and Matt Farrell left Notre Dame, this was always set to be a rebuild year for the Irish; however, that was made worse when Rex Pflueger tore his ACL in December. One of the youngest teams in college basketball, Notre Dame struggled to score consistently.

Notre Dame shot 31.8 percent on 3-point attempts this season and finished the ACC regular season with an effective shooting rate of just 46.6 percent. If those numbers hold, they will be the worst of Brey’s tenure in South Bend as the Irish rank 105th in adjusted offensive efficiency, too.

Ky Bowman put together another productive season for Boston College — his third with the Eagles: 19.2 points per game (26.4 percent usage rate), 7.5 rebounds, and four assists. As one could’ve predicted, though, he’s had some issues as defenses load up on him without Jerome Robinson.

Bowman’s turnover rate dropped this season (16 percent), which is good, and his 3-point percentage jumped (40 3P% in ACC), which is also good.

Obviously, not much has gone right for Wake Forest this season. Part of the problem: Wake’s gotten little offensive production from its centers. Two seasons ago with the amazing John Collins, Wake scored 1.13 points per possession (58.7 eFG%) when a screener finished a pick-and-roll possession, according to Synergy. Last season with lob dunk machine Doral Moore, that number hit 1.21 points per possession (66.1 eFG%).

This season, however, that number has dipped to 0.89 points per possession (43 eFG%).

Pittsburgh has a special talent at point guard. Xavier Johnson: Along with Ja Morant, he was one of 11 Division I players with a 30 percent assist rate and a 30 percent usage rate. In conference play, Johnson finished second in both assist rate (32.9 percent) and usage rate (31.4 percent).

Xavier Johnson with the nice relocation to the corner after the drive and kick. He probably could have put up the 3 but he attacks the closeout well and has a really nice finish around the basket pic.twitter.com/bkOTlRngW1