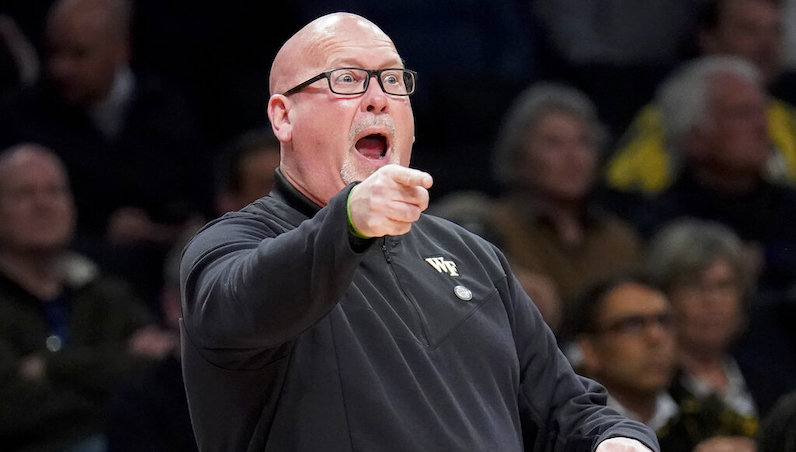 Wake Forest head coach Steve Forbes directs his players from the bench in the first half of an NCAA college basketball game against Boston College during the Atlantic Coast Conference men's tournament, Wednesday, March 9, 2022, in New York. (AP Photo/John Minchillo)

Jao Ituka, the Freshman of the Year in the MAAC, will head to Wake Forest. The 6-foot-1 guard played for Marist in the 2021-22 season. Now, Ituka will bring his talents to the ACC.

During his freshman year, Ituka averaged 15.3 points and 1.6 assists per game. Ituka was an extremely high-usage player, too: 35.4 percent, which ranked No. 4 nationally, per KenPom.

Marist transfer Jao Ituka has committed to Wake Forest, he told ESPN. One of my favorite sleepers in the portal. Elite scorer, per-40 minutes are off the charts. Averaged 15.3 points in just 22 minutes per game. Shot 41% from 3. Had eight 20-point games, including a 34-point one.

One of the things that should appeal most to Wake Forest fans, though, is Ituka’s ability to pressure the rim. This aspect will be a welcomed addition with Alondes Williams headed to the 2022 NBA Draft. According to Bart Torvik’s data, Ituka shot 101-of-182 on attempts around the basket (55.5 FG%). This accounts for over 63 percent of Ituka’s total field goal attempts.

With that rim pressure comes elite foul-drawing numbers, too. Ituka drew 7.4 fouls per 40 minutes this season, another Top 5 number in Division I. Ituka attempted 142 free throws this season (76.8 FT%), which translates to a free throw attempt rate of 49.5 percent.

In the offseason, head coach Steve Forbes has shown an eye for finding talent in the transfer portal. During the season, though, Forbes is willing to mold his offense around his on-court talent. During the 2021-22 season, Wake Forest’s staff empowered Williams and Jake LaRavia: spread the floor, run actions and make reads.