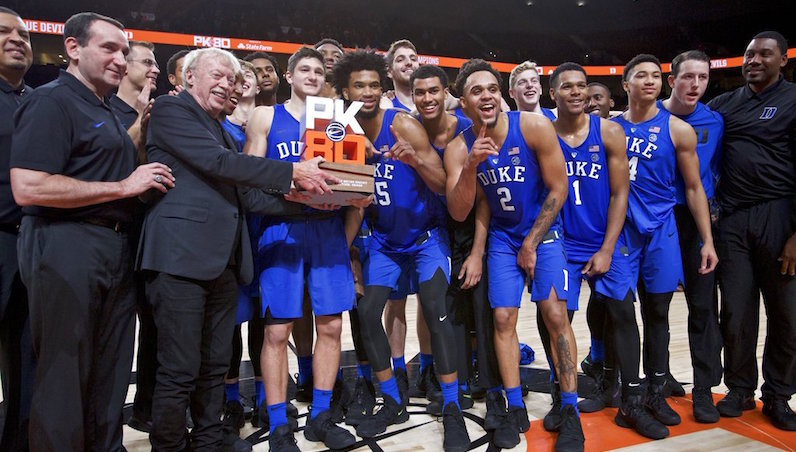 No. 1 Duke is off to an 8-0 start. The Blue Devils haven’t looked perfect; issues still linger on the defensive end. But it’s hard to complain too much after some of the impressive wins Duke’s put together.

During this short stretch, star freshmen Marvin Bagley and Trevon Duval, and super senior Grayson Allen, have snagged most of the headlines.

However, there’s no way Duke has wins over No. 2 Michigan State, Texas (No. 27 in KenPom rankings) and No. 7 Florida if not for the contributions from its bench.

By the end of the 2016-17 season, Duke basketball was essentially functioning with a 6.5-man rotation. The Blue Devils aren’t the Golden State Warriors when it comes to bench production, but with freshman Alex O’Connell, and sophomores Javin DeLaurier and Marques Bolden, Duke can credibly go eight deep.

According to KenPom, Duke’s starters have played nearly 75 percent of the team’s total available minutes. That’s a lot, but if you dig a little deeper, it’s easy to like some of the stuff the team’s subs bring to the table.

Marvin Bagley, Trevon Duval, Gary Trent and Wendell Carter are the stars of Duke’s rookie class; however, Alex O’Connell has added a much needed dimension to the Blue Devils on offense.

Unlike previous seasons, this Duke team is lacking in perimeter shooters. The Blue Devils are especially reliant upon Grayson Allen to make a lot of jumpers. As good as Bagley and Carter are in the paint, those two need the floor spaced — same with Trevon Duval and his drives to the basket. This is why O’Connell is such a find.

Outside of O’Connell and Allen, Duke is 26-of-96 (27.1 percent) on three-pointers. O’Connell has scored 41 points so far this season on only 23 field goal attempts. According to Synergy Sports, O’Connell is shooting 60 percent on spot-up possessions — 1.64 points per possession, No. 5 in the ACC.

O’Connell was key in the win over Texas. Before Allen fouled out, Duke got back into the game by running a barrage of high pick-and-rolls with Allen and Bagley. To keep the floor spaced, Duke stationed Trent in one corner and O’Connell in the other. This left the middle wide open for Allen and Bagley to operate.

The freshman from Georgia also made himself useful in this game by tracking down five offensive rebounds, including a critical one that lead to a three-pointer for Allen.

This all feels like found money for Duke. Not only has Coach K discovered another player that can contribute in leverage moments of big games; but O’Connell adds a set of skills to a Duke lineup that could really use a shooting boost.

After a somewhat forgettable freshman year, much more was expected of Javin DeLaurier this season in Durham. The 6-foot-10 forward may have some limits on offense, but the uber-athletic sophomore gives Duke some versatility and defense.

DeLaurier can vacillate between both forward spots, and Duke looks comically long when they play him at small forward along the back line of its 2-3 zone with Bagley and Carter. That said, rangier lineups that feature DeLaurier next to Bagley at the five likely have greater utility.

On offense, DeLaurier scores just four points per game, but his offensive rebounding rate of 15.1 percent, per KenPom, is a bonus. The defensive end is where DeLaurier can make serious impact plays, though.

Marques Bolden still looks a long way from the NBA expectations that arrived with him in Durham last August. But he’s finding ways to contribute off the bench. That’s big for Duke, in part because Wendell Carter is committing 4.3 fouls per 40 minutes.

Bolden grabs offensive rebounds by the bunches — an offensive rebound rate of 11 percent, according to KenPom. The 6-foot-11 Texan continues to have issues on offense (41.7 percent shooting on non-post-ups at the basket), but there appears to may some progression on the defensive end.

Teams will still drag Bolden out from the basket and dance at him with pick-and-rolls — something Duke can prevent by playing zone. Bolden, however, has shown the ability to get down better in a stance this season; he looked downright frisky on a few defensive plays against Furman. He also has six block already through the first eight games. Last season, Bolden blocked just seven total shots in 157 minutes of action.